I've just been contacted by Robin, of Robberie who are an acoustic indie group. Their latest record is all about retro gaming and features numerous devices like the Atari ST and ZX Spectrum. In fact, the Atari ST even played a role in the production using VideoMaster and this alone is mind-blowing. I was extremely fascinated by the ST's role in the production so he kindly sent information and pictures... Clickety-click to visit the Robberie website! 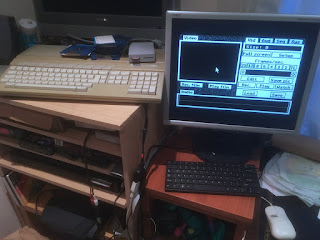 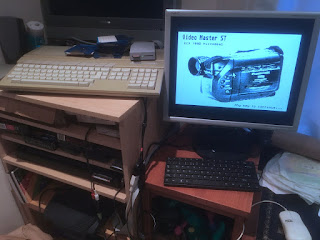 "My 1040 STE plays a starring role in the robberie video for Everyone's a geek, helping to create the pixellated monochrome shots. To do this, footage was recorded on a video camera, which was then fed through a Microdeal Videomaster cartridge. The software has a live preview mode which displays a quarter-screen feed of whatever you play in 16 shades of grey. So the recorded footage was played back and then I recorded the output from the computer's screen on my smartphone in order to get into a format compatible with editing software on my Mac.

There are some other Atari relics in the video. There are some shots of Roadblasters on my Lynx, which is modded with the brilliant replacement LCD colour screen. The shot of Pong is I'm afraid not original hardware but comes from an Atari classic tv games joystick.

And the Powerplay Cruiser joysticks are the ONLY ones that I could properly play Kick Off 2 on! You can find out more about the other retro hardware to be found in the video on the robberie website."