Whitewater Madness was under development in 1989 by Scott Williamson and Ed Schneider for Atari themselves and was designed specifically for the new Atari STe. Just imagine what would happen if you took Toobin' and then added a whole fist of violence. Whitewater Madness is the result, a vertically scrolling shooter which has us sailing a down a bizarre river through time - in a small Pod searching for green energy cells.

Collect these to raise your Warp Energy levels to maximum capacity so we can travel further through time. If successful, we are presented with an information screen telling you just how good (or bad) we did. However, if you failed to collect the required amount then you're sent back to the start again to do it all over again. 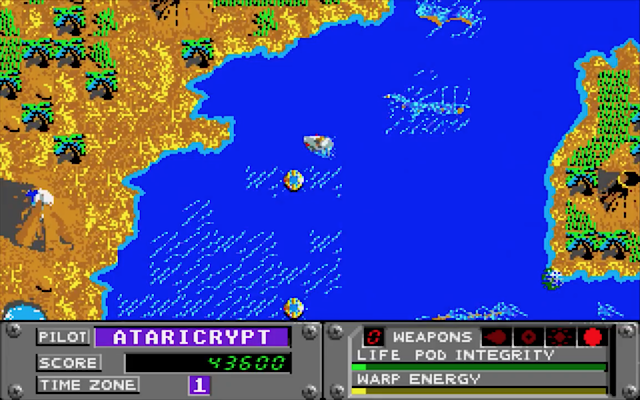 The controls are superb but you can also use the rapids for extra effect.

The controls are dead easy to get to grips with - and superbly responsive too I might add. I really love the directional method which works for fast and efficient guidance down the insane river raid. Picking up green "L" pills will re-charge the Pod and stop it from going BOOM but these are few, so collect as many as possible.

Our dinky is equipped with a rapid-firing mounted-gun! Which is a good job because we are under a constant onslaught of hazards and weird creatures. Try and avoid the many dangers such as rocky rapids, mines, artillery and other crazy stuff like kamikaze dinosaurs who love to leap from the shores! There are lots more to kill during the mayhem; cavemen, something that resembles a pterodactyl, a giant turtle, and centaurs. Love it!! 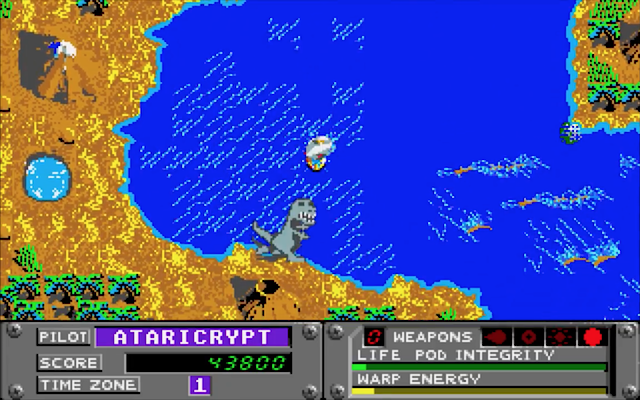 Those rapids are ace but you better watch out for the nasties - like kamikaze dinosaurs!

Scott tells me that the Blitter was used for the brisk scrolling which whizzes by and nicely keeps up with the hectic action. The sprites are small yet detailed with one exception, those massive kamikaze dinosaurs who love to leap from the shores - superb!! The DMA coprocessor is used to play the sampled effects and is super-duper. But I must admit to being disappointed with the (albeit nice) title tune which sounds very "STFM" in quality.

Whitewater Madness has the hallmarks of a fantastic oldskool game and is something I'd expect to see on the Atari 2600/5200. That is a compliment. I love the frantic Toobin-action which is perfectly balanced thus always great fun, yet still challenging without ever being impossible. Why Atari didn't release this game is unbelievable because it's a brilliant arcade boat ride adventure. And it's sailing all the way into the seas of retro gaming gold!!