I love finding Atari ST/e demos which I've not seen in years (or had forgotten about) and here is one which I enjoyed many moons ago... but somehow forgotten about!! It's called Van Eijk Collection and was developed by Van Eijk back in 1994 - a time when most of us had powered off the ST to play the mighty Doom. Sigh...

Anyhow, this is a collection of screens featuring dots, colour cycling, and a familiar tune you will simply adore. I think much of the demo was developed in GFA Basic but I'm only going off the scroller text - so I might be wrong? Presentation is a little sluggish and a few screens are dated, but there is also many which I did enjoy - that morphing is superb. All text is in Polish so don't expect to read anything - unless you're Polish of course!


This and many other Atari ST videos are on my YouTube Channel.
Credits & download links can be found on Demozoo or AtariMania. Crank up the volume! 🎧
4 comments:

Email ThisBlogThis!Share to TwitterShare to FacebookShare to Pinterest
Labels: Demos

Sardonic is a brand new (well, for the Atari ST) vertically-scrolling shoot 'em up that was recently released by José Mário. Yep, it's already out on other (lesser) systems so it's fantastic to see it also getting a Fuji conversion!! Now, I love getting my grubby mitts on anything new for the Atari ST so let's see what all the fuss is about...

This game is basically an old skool-styled shooter and the idea is to blast as many aliens as possible, use power-ups, kill the end-of-level boss and repeat. These aliens are constantly invading the screen in waves using various attack patterns - and from three sides of the screen. Our spaceship can only fire upwards but is freely able to move in all directions - rather than being limited to just left/right, ala Space Invaders. And it works brilliantly too! 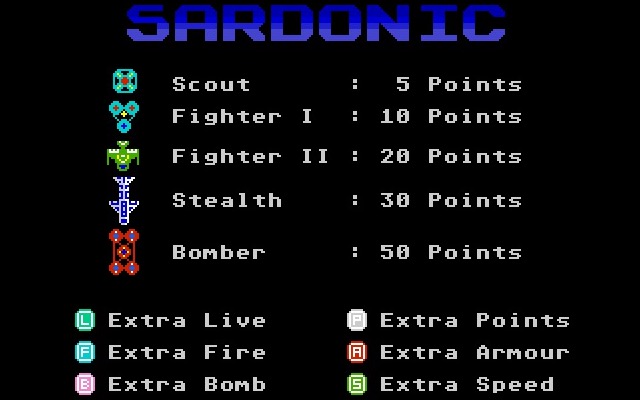 Each type of alien is unique and the power-ups will help to recover lost lives and much more! 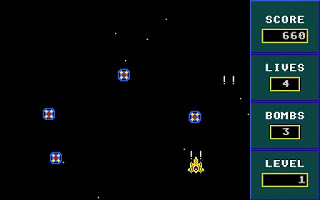 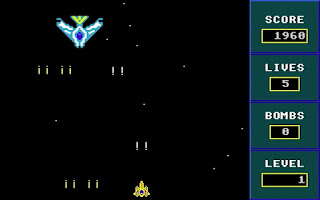 Sardonic is an arcade-style shoot 'em up so I love it already. Check out that funky mothership!


Interestingly, our Atari ST conversion has a few enhancements = extra power-ups, different enemies and new attacking styles. This is pretty cool and even more so when you remember than this is Jose's first Atari release!! Hold onto your hat because he's also implemented support for both ST models making use of the Blitter and also the STe's hardware scrolling = ultra-smooth 50fps action!

Boy, is this a tough game. At first, I didn't very last long and it took a few more attempts before I even came close to reaching the first boss! The action feels familiar but it isn't some cheap clone of Space Invaders, Phoenix or even Galaga but instead feels more like a game of dodgeball - in space! You can only fire a couple of shots at once and the enemy will come at you using some seriously wacky patterns so be prepared to battle hard.

Thankfully, blasting five of these blighters into smithereens will result in a random bonus for speed, armour, bombs and so on. This will help newcomers and thus I eventually got into the flow and reached the fourth guardian - which you can see in my video recording. Hint: if I was you, I'd save all those bombs for these bosses! 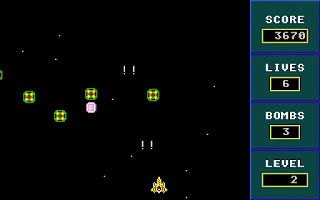 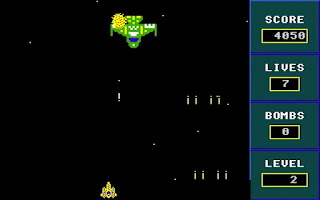 They're attacking from all directions and then their boss shows up for some gun love! 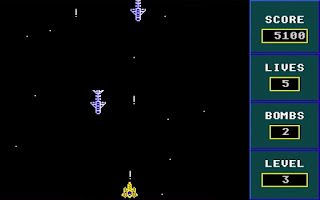 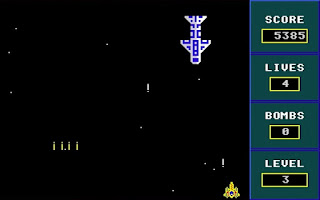 I hate the Stealth ships. They're so tough to destroy and then Mummy Stealth turns up!

Visually, there's not a whole lot to see beyond a boring black background populated with a few stars! This is quite disappointing but the enemy sprites make up for that with nice colours and brisk movement. I'm talking 50fps which is gloriously smooth - I just wish the background had a little "more" to it other than a few dots for stars.

Sadly, the audio failed to impress me after the title screen's funky chiptune. The in-game sound effects are rather insufficient, to say the least. Our YM chip has only three uses: firing, pickup and explosions. That is it. So I personally think more could have been done to dazzle? Especially on the Atari STe using DMA samples. 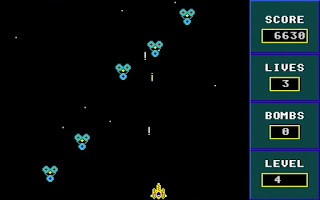 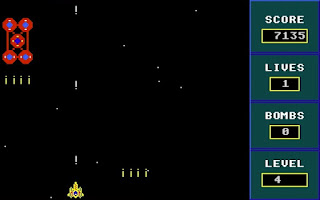 Can you believe I made it to level four? Until fatigue beat me and then the boss ...sigh! 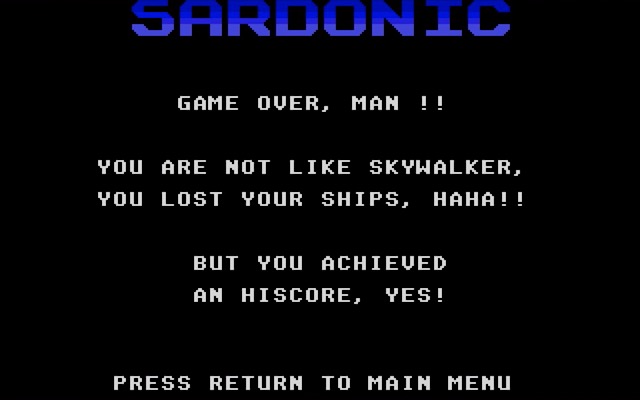 Sardonic is a good shooter alright. I love how those aliens attack in so many different formations and the power-ups appear frequently. Okay, it's quite repetitive, but this is a fun arcade blaster and is very addictive. It's impressive to think that one guy was behind it all and he supported Atari STe graphical hardware too. Incredible.

Overall, a slick and very playable shoot 'em up which I have really enjoyed. Download Sardonic right now!!

Email ThisBlogThis!Share to TwitterShare to FacebookShare to Pinterest
Labels: 2020, PD

Snippets from each game and even some cool Zynaps skills on show. Watch this. Be jealous!!

Well, I finally got around to finishing what took me a lot longer than I originally thought. Yep, I completed the task of reliving Christmas 1988 by playing Atari's Super Pack and it all started with this article (click & read) :p

To be honest, I probably played the games a lot more this time around. Back in the 80s, I would have spent the most time on Buggy Boy, Beyond The Ice Palace or Xenon? I doubt I would have had the patience for Marble Madness nor the desire to spend hours on Quadralien. BTW, each game is searchable if you look to your right --->


So which game won my heart?

Wow, that is a tough one alright. But, IF I'm in the mood for something of a platformer then it's no contest: Beyond The Ice Palace wins hands down. A shooter? Zynaps! Also, Buggy Boy is a great old skool arcade racer. However, the Super Pack is diverse in content and quality so I feel the need to push for a decision!!

Okay, cue "Whole Lotta Love" because my Top Of The ST Pops desert island floppy disks would probably be... 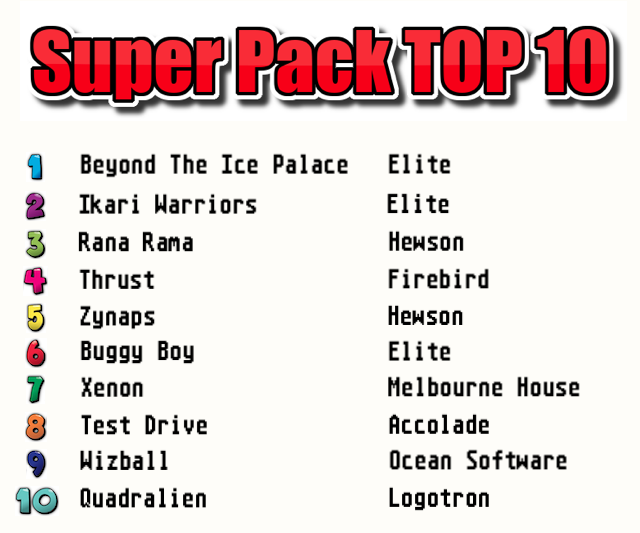 Well, this has been enormous fun over the last few months and it certainly proves that Atari went that extra mile in the 80s. What a giveaway it was - 21 incredible games AND an Organiser too (Woo, fun times). Anyhow, my Super Pack mission is now over with so let's see what else is lurking within the Atari ST archives throughout 2020...


And, if you can't be bothered using the search engine, then click here to see all the games!
3 comments:

Zynaps is a Nemesis-esque shoot 'em up that spookily reminds me of another Hewson title, Slayer... We pilot the Scorpion Mk1 Fighter through the heavens in search of a secret alien base. Along the way, are hoards of these alien scumbag in ships, a variety of ground-based defences and even motherships. Original, right?

Our Scorpion spaceship is pretty snazzy and comes with different levels of propulsion along with various weapon upgrades. However, we do start off quite limited with sluggish movements and firing - so shoot that first wave of bad guys to collect their loot for speed-up. Then look to improve lasers or even bombs and missiles. 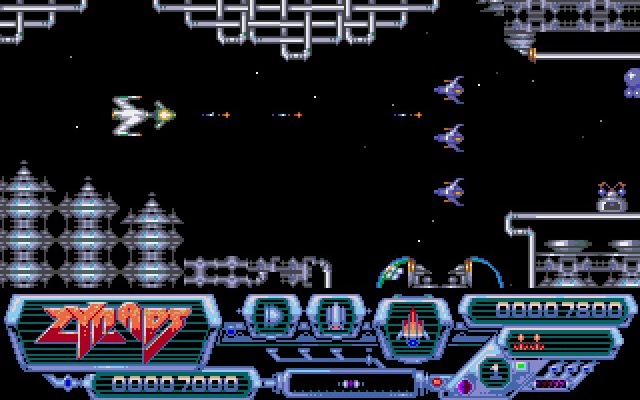 The first level is cool but it's not long before a guardian appears! 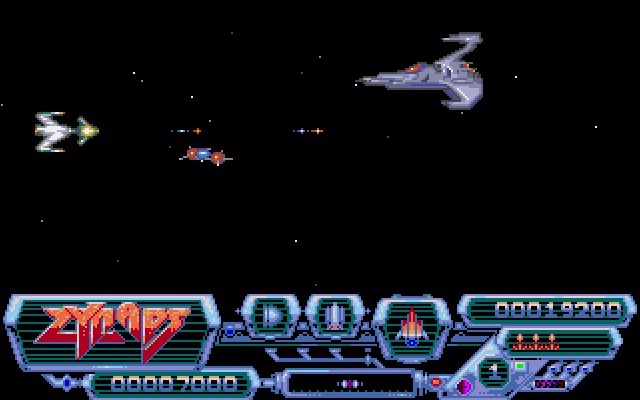 That thing bounces around the screen like an old skool demo!

Activating these power-ups is a little strange. When a group of baddies snuffs it, they leave behind a pod. Collecting that changes the power-up being displayed in the status bar. So when something appears that you like the look of - hold down the fire button during the next pick-up to be granted permission to use it. To be fair, this is a bit weird and rather naff - especially during the heat of battle. Surely this could have been designed much better?

The enemy attack in predictable formations which kinda reminded me of Wizball oddly enough. At first, firing accuracy is difficult so hitting the bad guys is harder than it should be. This learning curve I found to be massive and it took a number of attempts before I started to destroy an entire wave to begin collecting the pods! Sigh... 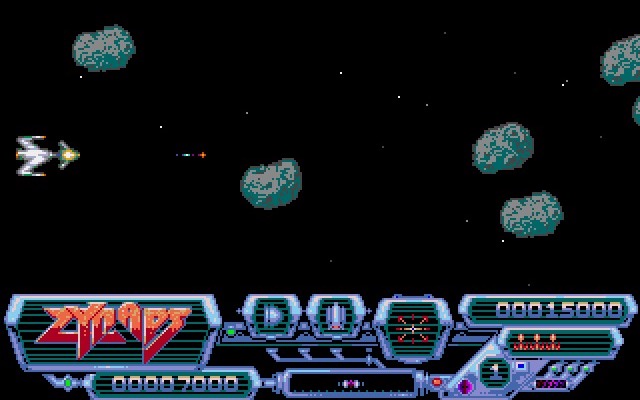 Woo! What's happened to the landscape backgrounds on the next level? 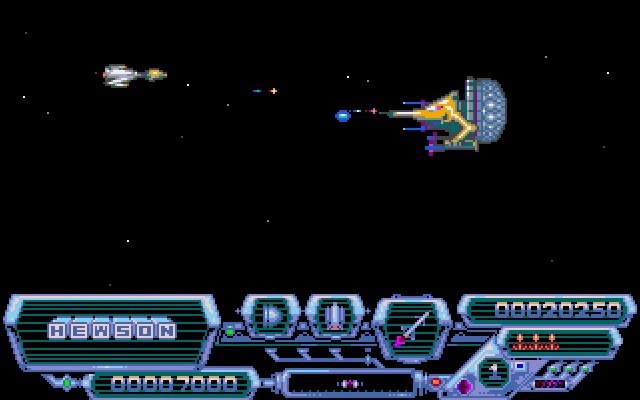 Getting past those asteroids is tough but now it's a boss fight and he's a bit weird...

Most levels take you through beautiful environments whereas others might take you into an asteroid field. No matter where you are, watch out because the slightest collision loses a life which is easily done too. This is made worse by ultra-cramped areas thanks to the bulk of that scenery (and the status bar). Fly like Buck Rogers... or die.

Eventually, you will reach an end of level boss and most are really tough so it's doubtful you will see many victories on your first go! The first boss hops around the screen like a sprite from an old skool styled demo. Rarely did I see the end of the second level (without using a trainer) but, YMMV. Just don't give up, you wimp!! 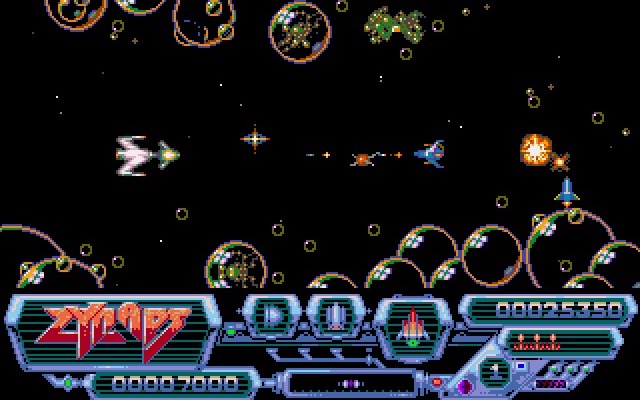 Things get freaking on level 3 but it's a good kind of freaky :-) 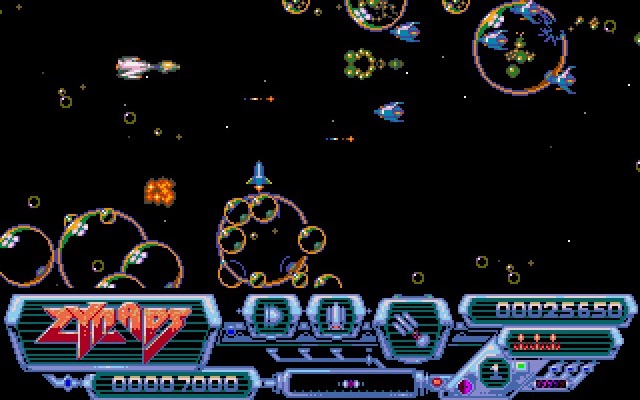 Well, except for the boss(es). Very lame!

Zynaps is a gorgeous shoot 'em up, it really is. Sure, I know games like Xenon 2, Magic Boy, Gods, Deathbringer, and others blow it out the water but this old 1988 shooter holds its own thanks to Pete Lyon!! The title screen is wonderful - pure art - and many of the levels feature a Menacing array of beautiful environments. Also, the sprites move fast and smooth with nigh on perfect scrolling to boot. This is another quality Hewson product. 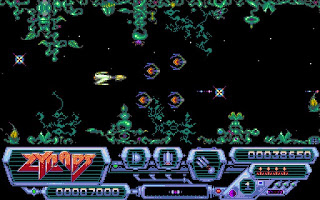 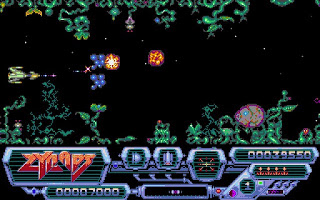 Things get a little Menacing for the fourth level which looks stunning - if deadly. I never beat this...

Zynaps theme tune is outstanding thanks to the talent of one of my favourite musicians, Dave Rogers: a man who is responsible for many of my ZX Spectrum memories not to mention ST beauties like Ranarama and Cybernoid. Okay, the sound effects might pale in comparison but they're still excellent and offer an arcade-like style: I love that sharp "zing-zing" when you shoot, the crunchy death effect, and how you are mocked when it's game over.

Zynaps is one of those games which appears to have it all but many give up after a few goes because of a cruel learning curve. Perhaps gamers were tougher people back then? Possibly, but this is a killer with relentless action so you're always on the edge of your seat wondering what's coming next. The method of using power-ups might be flawed but these are essential to enhance your Scorpion with better firepower and manoeuvrability.

Hewson rarely disappoints and Zynaps is yet another corker from their incredible library. Sure, I've had a moan about a few things but nothing is perfect and I can forgive a lot if I-can-have-just-one-more-go. Very addictive!! What an extraordinary shoot 'em up and it's a great feeling to end my Super Pack series on a massive high.


Grab the floppies if you dare but I recommend these excellent HD versions by Klaz and PP.
6 comments: