It's that time again when I try to find something Christmassy from within the Atari ST archives. However, this time I didn't want a game so went looking for a demo and I think I've found a belter: Xmas '88 which was released by Kenrick Productions. I hope you like my choice which I find so endearing with cute animations and a few appropriate chiptunes to get you in the festive mood. Merry Christmas everyone and I wish you all the very beST †

Email ThisBlogThis!Share to TwitterShare to FacebookShare to Pinterest
Labels: Miscellaneous

I first thought this might be a remake of Mervyn Estcourt's awesome ZX Spectrum racer but alas it wasn't. Actually, it's a vicious top-down shooter developed in 1996 by Daniel Fielding and seems to take much inspiration from a variety of great games with support both solo and an incredible co-operative two-player mode.

This is sounding awesome already, either solo or with a friend. We begin armed with only a pistol and must explore several rooms which are inhabited by killer cyborgs. Come on, guns and bad guys to kill. Bring it!! 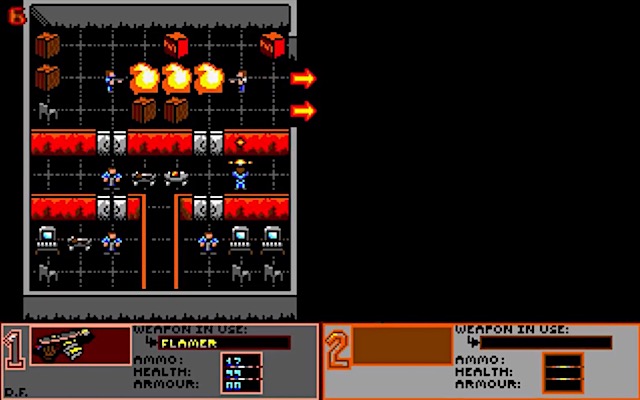 Each room holds so many possibilities for a whole new level of violence. It never gets dull!!!


Who enjoys guns and loud violence in their games?

Our armoury is huge with a possible 18 weapons ranging from pistols and shotguns to rocket launchers and lasers. Star Wars fans will probably enjoy using the lightsaber? Weapons, ammo and health are found in most rooms so inspect lockers or look on tabletops, but beware of potential traps like mines or even TNT crates.

The deaths are hilarious when you zap, sliced or blow up the enemy and there will usually be a bucket load of blood splattering the room! Heck, even your own death can be a fun experience when a shotgun-equipped Eliminator blasts you across several rooms. This leads me to the game's brilliant continue option so you can try again without restarting from the beginning. However, you lose the cool weapons but still have a pistol and your meaty fists. 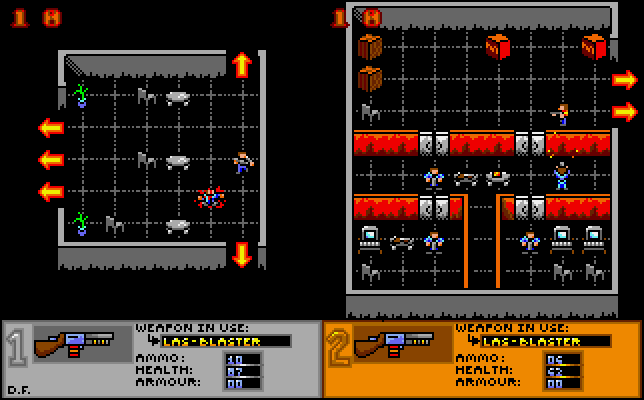 Death Chase is insanely good fun and bucket loads of it too. Either solo or with a friend.


Each level has two types of killer cyborgs :

Security Guards - these are common and wear a blue uniform but have no intention to serve and protect. Their armour is quite weak but they can use a range of devastating weapons and will often attack in groups.

Eliminators - these are definitely the toughest and stand out like sore thumbs in yellow body armour. However, this is what helps to make them difficult to kill and they can even carry a range of advanced hardware, like a mini-gun or a rocket launcher. Also, they don't care who gets in their way and even unlucky Security Guards can be torn to shreds during their pursuit. Interestingly, these guys aren't restricted to the one room and love chasing you through the screens. So beware because running away like a chicken will be of little benefit. 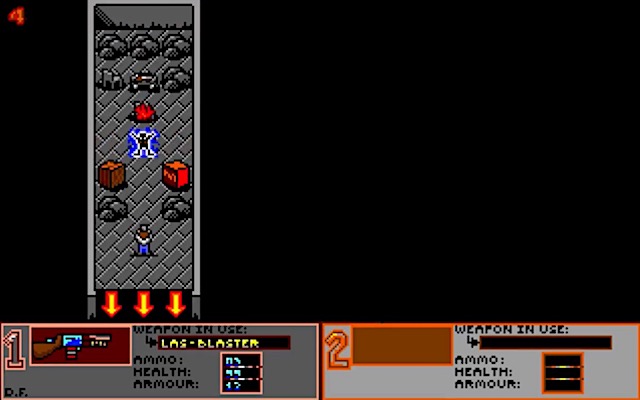 Only one guy stood between me and that ammo. So I fried him alive. Mwahaha!!

Similar to Rogue, movements are performed in steps but I would not recommend using the joystick which is far too sensitive. Initially disappointed by that, I tried the keyboard as suggested in the docs. This actually works better than I ever imagined: the A and D keys are used to turn anti/clockwise. W walks us forward with the Spacebar used to select from an array of different weapons (read the docs). Finally, banging on the Right Shift key is the best of all and provides an enormous amount of gratifying blood-soaked violence (love that double-barrel shotgun)

The graphics remind me of how today's developers seem to think "retrogaming" looked back in the day. Okay, it ain't no Enchanted Land but I'm really impressed by the blocky pixel art which is a style perfectly apt to its theme. The audio is equal to the visuals with a bunch of incredible Mad Max chiptunes played alongside crystal clear DMA samples. These were recorded using Microdeal's Stereo Master from movies like The Evil Dead.

Death Chase is almost like a nightmarish and blood-soaked version of Rogue. Love it!!

This is why we play Atari!!

I cannot stress how much of a thrill it is playing such a psychotic shoot 'em up which looks, sounds and plays brilliantly. The two-player co-op mode and the ability to continue after dying are killer features that guarantee hours of fun. I love this barbaric shoot 'em up and Death Chase is definitely one of the best games I have played.

Yes, I said that. Not only is this a brilliant Atari STe game but it's one of the best games I have ever played.


Creepy is about to enter a castle owned by The Lord Of Darkness to find four pieces of the Necromancy Scroll. That should help to defeat this nasty man and restore peace to a land ravaged by all kinds of evil monsters. Released by Atlantis Software in 1991, it may sound like yet another predictable good vs evil affair but just wait until you play it! Some might say it's inspired but really it's nothing more than a shameless Atic Atac rip-off.

The Lord's castle is huge with every room constantly spawning a whacky bunch of evil monsters. Some are easy to kill but others are a lot harder, like the She-Warriors who ride on dragons. She might be tough but, if you defeat her, then Puff is left behind so hop on and take this magic dragon for a spin. Watch out for other nasties like the odd-looking Frankenstein and a ginormous spider - that had Mr Creepy running away like a big girl!! 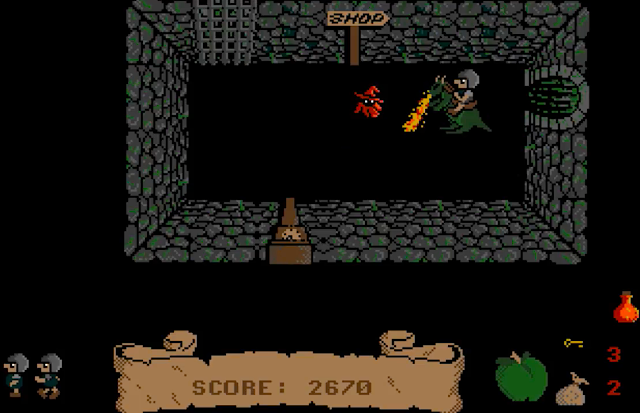 We are equipped with arrows but these are slow so it's best to upgrade to something better in the castle's shop. Yes, this castle has a shop with which to buy various upgrades, like health and fireballs using the money collected during our quest. I really liked the fireball weapon and restoring health is always a wise purchase. Locked doors can be opened with the correct key and tiny yellow keys will unlock treasure chests that adorn many rooms. Gamblers will love these as you never know what's inside - something useful or something sinister?

Creepy isn't a carbon-copy clone of Ultimate's classic and plays a lot quicker with other subtle differences within a castle that is far more dingier than the colourful ZX Spectrum game. It did take me a while to feel comfortable with the extra speed but it wasn't long until I was zipping through the screens like a crazy medieval dude. 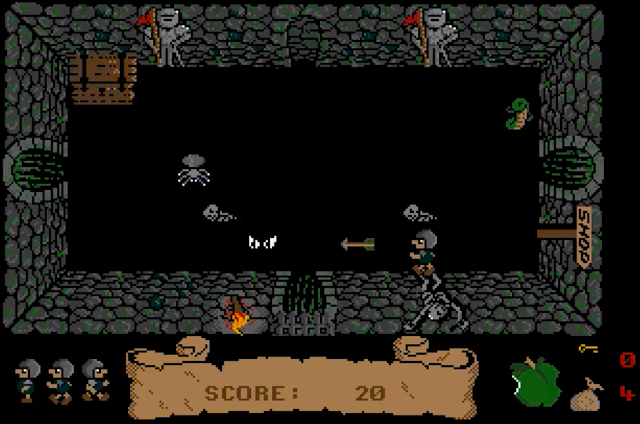 Monsters won't aimlessly wander around your screens because this time they sure love to play chase - at the expense of your energy level. And this is now displayed using a crunchy apple rather than the brilliant roast turkey health meter. Also, a life loss no longer leaves behind a Cross where we breathed our last breath. And I still haven't made up my mind which game has the best effect of falling between floors...

Okay, those old enough to have gasped in awe at Ultimate's 1983 classic will probably turn up their nose at this blatant imitation. However, I am incredibly impressed by the fast and furious oldskool gameplay, which is a lotta fun. Of course, Atic Atac wins this battle hands down but I still think Creepy has much to offer - because it's a great game in its own right. I enjoyed it a bunch and highly recommend you play this nostalgic 48K impersonator.

- 8BitChip has a hard drive installable game which also contains a scan of the manual and infinite lives!
- Floppy disks can be nabbed off Stonish and Zuul #140 is a fantastic disk to choose.
No comments: