The Lost World was developed back in 1989 by John Leather who sadly never managed to find a publisher. The game itself is complete but the audio was missing and he "only" managed to design half of the planned 100 levels. Since then, a tune has been added which suits the gameplay perfectly and, if dozens of playable levels aren't good enough for you, then why not try creating the remaining yourself using the in-game editor?

I have always loved platformers of this ilk and it's obvious the John was inspired by the Willy games from the Sinclair ZX Spectrum because every screen has a wicked title and even the main character walks similar mechanical fashion to Master Willy. This is an incredibly challenging platformer with a steep learning curve so, as with Mouse Trap, hit the F key (pause) and carefully study every inch of the screen to plan yourself a favourable route. 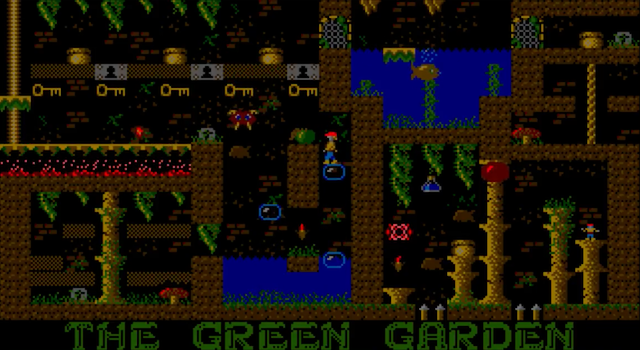 Just look at the intricate layout and design. You ain't gonna complete this on your first go!!

The first screen is tough and it took me more than a few attempts, but it's easier on the following level (although I failed miserably for my video recording). Then, the difficulty is cranked up for an amazing third level, the superbly titled: Pie Processing Plant. However, I've yet to beat The Locksmith so it's doubtful I'll ever be disappointed that John couldn't fulfil his desire to create more screens!! Perhaps I should try that level editor?

The Lost World is challenging, even for a hardcore fan like myself. Get used to the evil critters which come in an insane variety, and are not limited to moving back 'n forth or up 'n down. Watch out for sinking floors, sharp objects and lots of tricky jumps! Thankfully, it's quite generous with many bonuses littered throughout each level along with stickmen for extra lives. Pressing the spacebar displays a dialogue of potential spells and potions for effects like invulnerability. Yes, there is far more to this lost world then first meets the eye. 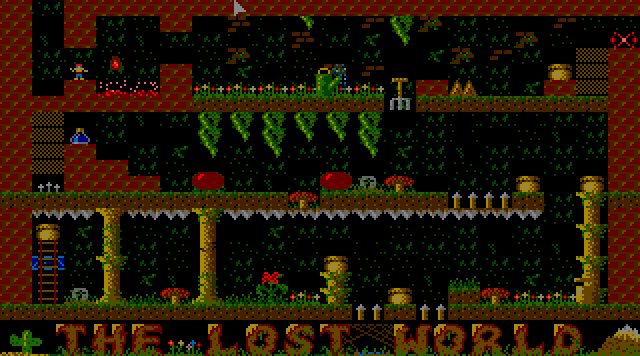 Whatever you do, don't forget the keys... What's the little man doing there?

The graphics are beautiful. A true 16-Bit take on the early 80s and stuffed to the brim with incredible decor and intricate attention to detail. Sadly, the original had no sounds but this was rectified a few years ago by Grazey (Psycho Hacking Force) so we now get to enjoy a fantastic Mad Max tune. This chiptune is a beauty and suits the gameplay perfectly. Sadly, I admit to missing sound effects, even if only for jumping or collisions...

For a homebrew game, this is huge and I don't simply mean the number of levels. The creativity that has gone into its development is exquisite and there is always something interesting that catches you out. Don't be a wimp, learn the mechanics and beat its cruel learning curve because this is a tremendously addictive platformer!!


D-Bug has both downloads (with and without music) plus AtariMania has level editor help!

Email ThisBlogThis!Share to TwitterShare to FacebookShare to Pinterest
Labels: 2010, Unreleased