Legends Of Valour is one of the last Atari ST games I purchased and it received relatively favourable reviews. However, I was smitten by its depth and longevity not to mention the first-person aspect and superb packaging!

Our adventure begins in the city of Mitteldorf in search of our missing cousin, Sven who previously set out to find his fortune. However, it's been far too long since anybody heard from him and thus our adventure begins. Firstly, you should design your character's appearance, clothing, and armament. You can be either human, dwarf or elf with each profile offering a different game style and objectives. Select hair, eyes, nose and so on to create your demi-god or (like me) perhaps your character will end up looking like something from a freak show? 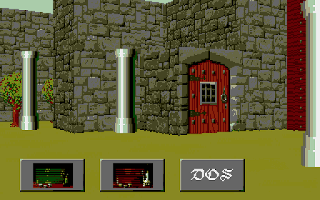 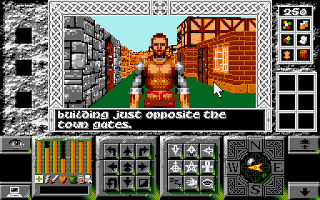 Does the first screen say "DOS"? Anyhow, it's not long until you begin your ST adventure.

Once you're dandy, enter into the city and heed the advice from the friendly local that pops-up for a chat. I would first advise you take the time to explore and familiarise yourself with your surroundings because this is such a massive place and you will need necessary amenities, like safe lodgings, income, beer to sup, and grub to nosh. Mitteldorf is a fortress city, populated with some very interesting characters, secretive guilds, curious places, and even a labyrinth of dungeons hidden deep underground. Of course, these are just itching to be explored, but be careful because you might not like what you find down there. Your cousin wrote a letter which nicely explains his story, why not take a read? Perhaps it features hidden hints that should help you along your journey. Heck, you never know!

All exploration is through a first-person engine not too dissimilar to a shooter like Wolfenstein with fully texture-mapped graphics - a testament to what our 16-bit computer can knock out. This can be configured in three display sizes, small, medium and large. Any ST will be fine but the largest setting requires a 16MHz CPU minimum. Initially, the interface is a little scary due to the huge number of icons but soon becomes intuitive and easy to use. Wandering the city is feasible using the GUI's icons but it can become a little laborious due to the immense size of the play area so a right-click will activate mouse control to unlock its full potential, and is also tremendously good fun. 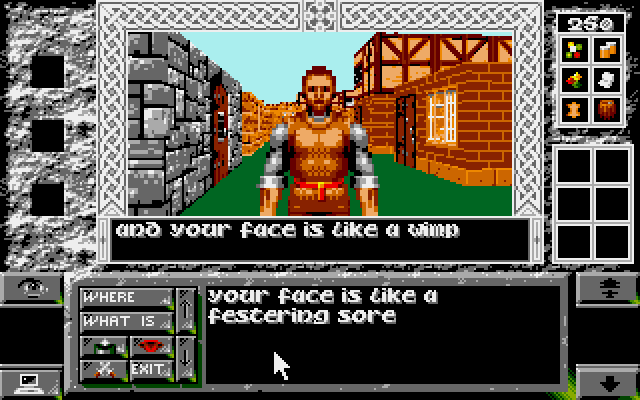 It isn't long before abusive name-calling begins... but a festering sore!! Really? 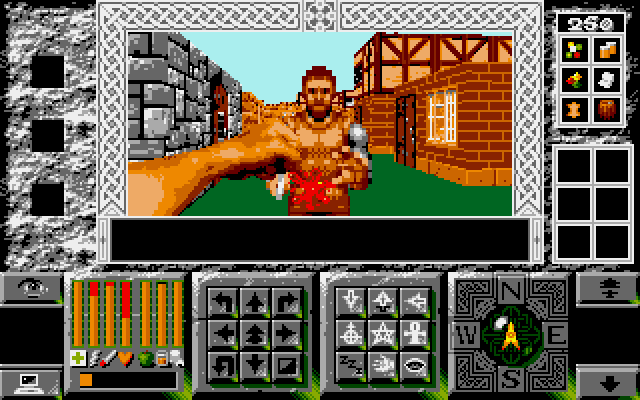 I'm not standing for that and throw a few punches. Life here is never dull!!

Legends Of Valour isn't something you simply play - you live it. Life here is completely open-world, a "sandbox" adventure, where you are free to roam and do almost anything you want. This has always been a fascinating concept for me and, although this is an early example of the genre, it works extremely well.

Exploring Mitteldorf is exciting and bursting with fun characters, monsters, temples, stores, taverns, employment and more. I love the Olde English medieval setting which is portrayed and experienced in real-time, so day and night pass by with their own consequence. All the usual requirements we have in life also exist here: eating, sleeping, health and our personal safety when in dodgy locations - especially late at night. I find refuge in a few ales at The Hanged Man tavern is often the best option, but perhaps that's me? Just don't get too tipsy and end up in lockup! 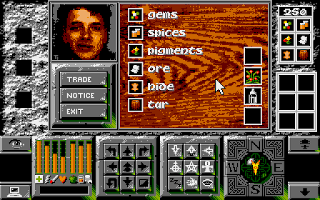 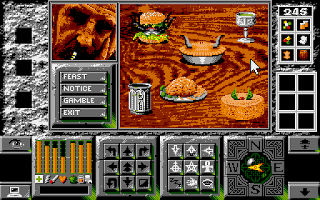 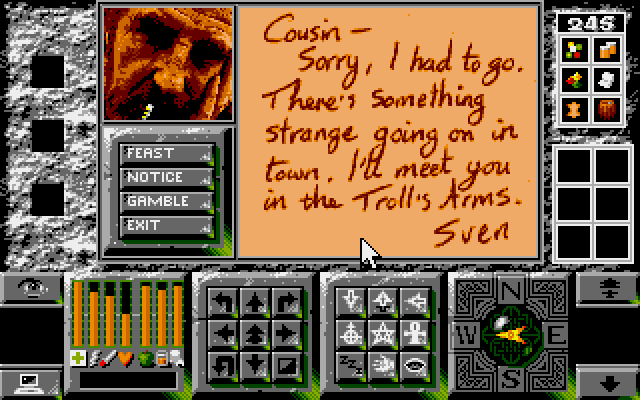 This game is humungous and not something to play one boring afternoon. Learning the city of Mitteldorf alone can be overwhelming, so make notes and a basic key to complement the official map. So much can be learned by communicating with your fellow citizens so get chatting to them over a beer or perhaps those strange folk that appear to aimlessly wander the streets. However, be prepared to defend yourself when set on by anyone from the King's faithful knights in shining armour. Even a little old lady can throw a barrage of humorous insults before giving you a good slap. There's only one thing left to do - slap her back!! (tell me you're not tempted?) :)

I love wandering Mitteldorf, but nothing is perfect and I feel Legends Of Valour lacks in a couple of areas. The battles could have been thought out a bit better and it's disappointing to discover most buildings are empty of furniture. Also, audio is limited to spot effects which is a shame considering the number of disks in the box, I think some ambient samples or more varied chippy fx could have tremendously improved the atmosphere, especially at night. 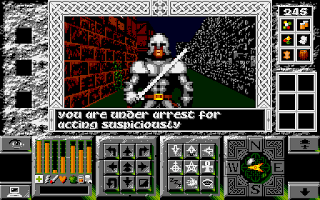 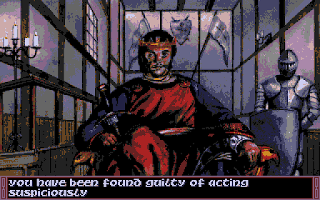 Arghh!! I've been caught being dodgy (yet again) and thrown down before the King's mercy.

Legends Of Valour is something very special and offers a vibrant and exciting place to live. So many cool characters, taverns to frequent, secret guilds to master, monster-infested dungeons to plunder, and then jobs or missions are always on offer. This game has it all and, as you begin to make progress and delve in deeper, you soon realise just how much more potential it features. Heck, I had forgotten all about searching for cousin Sven!

Not perfect but so close and incredibly entertaining and an enthralling adventure. So, allow yourself to get lost in this immensely rewarding adventure because it is most certainly one of my favourite Atari ST games, ever.


This is best ran from a hard drive so use 8BitChip.
Those stuck with the floppy should try Old Games Finder.
A city map and clue book ... I had fun in October!!

Email ThisBlogThis!Share to TwitterShare to FacebookShare to Pinterest
Labels: 1992, Adventure/RPG