It's time we posted more cool pixel art and today is Ubi Soft's Sir Fred (aka Fred) which is a medieval scrolling platformer featuring the most beautiful visuals by Jean-Marc Torroella and Jerome Guerry. In fact, I'd go as far as saying that this contains some of the most unique styles with stunning attention to detail using a colourful, yet eerie, palette. The sprites are wonderful and nicely animated - even those rude ones who stick out their tongues!!

I feel sorry for our once fearless knight who was tragically zapped into a midget by an angry dwarf. Shocked by this, he shakes his fists at his beaten foe but they cannot help themselves and burst out laughing! Adding salt into Fred's new wounds is a naughty gnome who ends his ridicule in what can only be described as a brilliant opening intro. 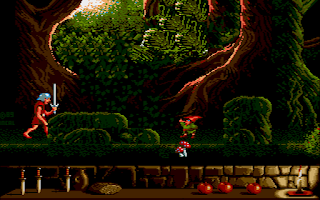 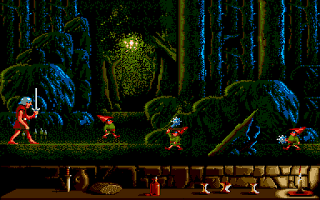 Click on any image to see the larger size. Impressive 16-bit pixel art!!

So, we're a miniature warrior who begins his quest in a spooky forest and battling cute garden creatures? Well, there are many other beasts lurking in the woods and castle grounds like skeletons, snakes, headless axemen and ghosts. All want you dead, so kill them with your stock of rapid arrows - these can often reach the baddies off-screen! Fred is a nimble chap with the ability to walk, leap and roll his way through his adventure but the cumbersome controls often got me into trouble. Turning around reminded me of Black Lamp feeling quite restrictive and lethargic. 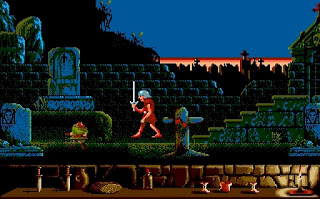 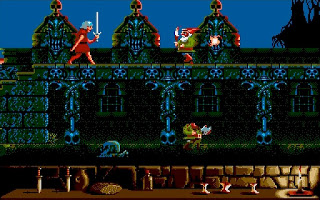 I absolutely love the details and the murky palette which looks so perfect for a creepy scenario.

Interestingly, we have multiple platform layers to climb steps or bypass obstacles like rocks or trees. Battling your foe also requires that both are on the same level but this was a little confusing and didn't work well when being attacked from all sides... Energy levels are indicated by three apples and, once they're gone, you're dead as a dodo. Sadly, they don't last very long, but death his produce a humorous effect as our hero drops his sword in agony! 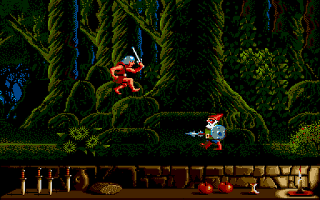 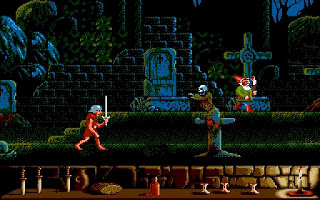 Those darn gnomes are a pest even the rude ones lol

Fred is a good game but it's simply far too difficult thanks to the fudgy controls that ultimately spoil what might have been. Also, more checkpoints are needed to prevent you from restarting at the beginning, which is extremely annoying. Overall, I felt Fred fell somewhat short of the mark, which is ironic, uh? If you fancy helping out Fred in this beautiful 16-bit adventure then pick up a sword and boot up this floppy disk or run this hard disk program.

Email ThisBlogThis!Share to TwitterShare to FacebookShare to Pinterest
Labels: 1989, PixelArt