It's time to kickstart my Super Pack adventure with Imagine's Arkanoid: Revenge Of Doh. Now, I'm sure everyone has played this at some point in their life because it's such a popular classic and easy to pick up and play.

Our ST conversion was developed by a familiar name from the 1980s, Peter Johnson. This wizball not only did all the coding but everything you see and hear too which is quite staggering when you think about it. From the moment this loads up, I'm in love with its authentic intro! Okay, it's short but it works and features that zappy music! 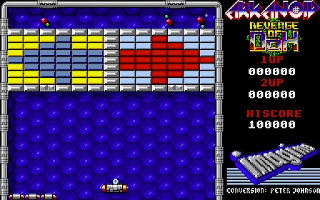 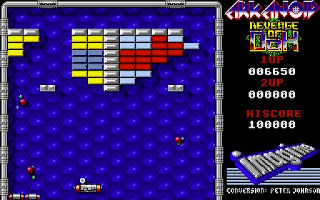 The first level breaks you in nicely and it wasn't long before I found an M power-up!!

Using the mouse... Yes, the mouse!! Control the Vaus Craft to deflect the energy bolt back and forth destroying every (destructible) block - Breakout style. You can guide the bolt depending on how contact is made: inner areas produce a taller vertical direction whereas outer parts deliver a wide-angled shot. I must say, the mouse controls are excellent, but don't think that means easy because your hand-eye coordination will definitely be tested!!

Each level follows a trippy design to compensate for the ridged format and later screens are incredibly tricky. Watch out for the aliens who enjoy hovering around to get in the bolts way and ricochet the bolt off at an unexpected angle - which is really infuriating!! So use the Vaus to nudge them into an early grave when they get too close...

Thankfully, the power-ups are back and we have a wealth of snappy bonuses to make full use of:


B - Who doesn't love skipping levels if given the chance?
C - The Vaus Craft gains velcro!
D - Split the bolt into eight - can you handle it though?
E - Bigger is always better, right?
I - We have a ghost Vaus to make our hits a little easier.
L - Hit that mouse button because we have weapons!!
M - Destroys blocks like they're not even there. Amazing.
N - Splits the bolt, which regenerates to keep on damaging.
P - Sounds boring but extra lives are incredibly valuable.
R - The cold of space has shrunken you!
S - Collect this if things are getting too hectic.
T - You gain a twin to help you in your quest!


Graphically, you won't see any mind-blowing artwork but it's so reminiscent of the arcade original using vivid colours. The aliens might be incredibly annoying at times but at least these sprites look great. Arkanoid is as bold and colourful as you would expect and shows just how far we came from the original 1970s Breakout!!

Sound effects aren't going to drive you wild with excitement but who expected anything beyond dink...dink...dink...? Thankfully, the tunes are superb even if we're only talking mere seconds, but I love their authentic quality. 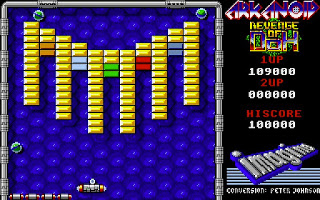 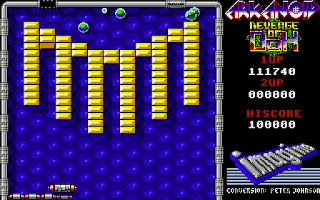 Personally, I think this is one of the hardest levels in the entire game. Just try and get that last block...

Usually, I would now mention all the things about a game that narks me. There are none...

Okay, I think it's easy to say that Arkanoid took the Breakout genre to a whole new level. This sequel is so addictive and infuriating yet always keeps you coming back for more. It's everything I would hope for in an arcade conversion and is certainly one of the best. Overall, I rate Arkanoid II Revenge Of Doh as categorically outstanding!!


Downloads are available for either floppy or using a spanky hard drive device. And, for those of us that are far too impatient, why not skip a level by hitting the S key during gameplay? All ya gotta do is hit the CAPS Lock key when the title screen is displayed and enter MAGENTA. Sweet!