So far, my Super Pack adventure has been very strong with some huge titles: Arkanoid II Revenge of Doh, Beyond the Ice Palace, Black Lamp and Buggy Boy. All are searchable right here and all are sweet Atari ST classics. However, there's always an exception and it was Chopper X. But we'll say no more about that...

Okay, the sixth game in the Atari Super Pack is Eddie Edward's Super Ski which is basically an "Eddie The Eagle-endorsed" version of Microids' Super Ski. Now, everyone (here) admired our lovable sporting icon who was our plucky hero that certainly won over the entire nation's heart. Heck, he even got his name on an Atari ST game which is a gold medal moment and far more impressive than the Calgary Winter Olympics. Oh yeah! 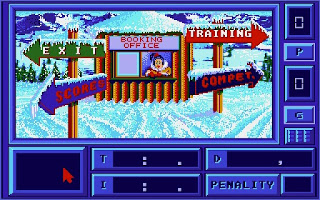 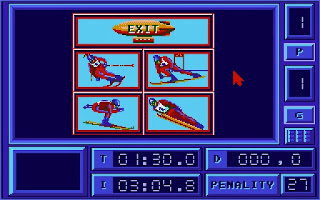 Okay, there's no music but the interface is clear and well-designed. I like the ability to instantly play!

Oddly, I had a bit of trouble running this game on my own STe so I switched over to Hatari and configured that to emulate a basic STf (TOS 1.02). Also, (thanks to AtariMania) I had a good laugh reading the box cover which says: Fly like "the Eagle" on the Ski Jump!!


Super Ski is a 3D skiing simulator where we compete in slaloms, downhill racing and a ski jump. Each event is experienced from a third-person perspective to show Eddie in the thick of the action - which basically means we try our best to help keep him on course using our lightning-fast reactions. Which is harder than it sounds...

The races are fast. And I do mean fast! Chose from three tracks that increase in their number of twists and turns for a chaotic experience. Controls are superb - move from side to side to steer through as you zoom down the snowy hills (press the fire button to move quicker). To increase your speed, push up, for an insane boost!

Competition mode supports multiple players using the Booking Office (which is a bit weird) to choose how many and their names. Now you can find out who can jump the best and ski the fastest without incurring too many penalties. You might even become a human snowball... Tell me that ain't the funniest thing you never expected to see! 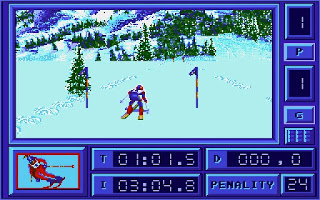 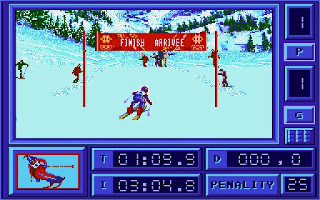 If you can handle it, ride low for faster speeds. I did and finished without turning into a snowball!!

There is a training mode used to practice each of the four events before taking part in the competition. Using this is something I cannot recommend highly enough, because you will certainly need lots of practice:

The slalom games are fast so require quick reactions to safely navigate each of the progressively difficult tracks. The harder you go, the more winding the path and all whilst trying to hit through the gates. Wow, these races are insane - dare you hit UP to go even faster??

Ski Jump is simple and simply awesome. Sure, it's over within the blink of an eye compared to racing, but it's exciting to see Eddie fly like the eagle he was (ahem). I really enjoyed trying to get the speed and angel just right - now all you've gotta do is try and stop. If you can!

Downhill Racing is very similar to the slaloms and, I suppose, sports fans will hate me for saying that? However, I found it harder because I felt snowblinded due to the lack of colour and visual objects! It's fast, it's furious, it's racing so crouch down if you can handle the exhilerating pace. 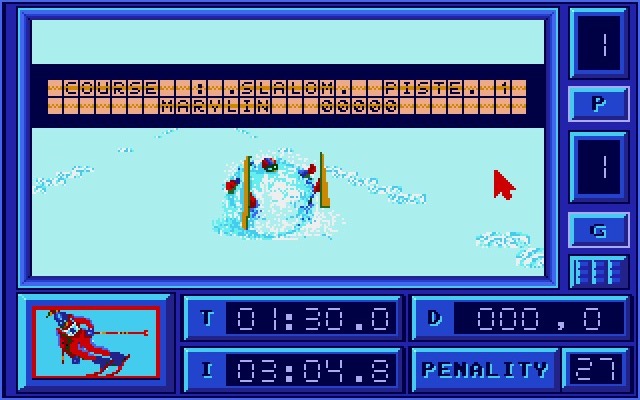 This has got to be one of the best moments in gaming? I never expected to be Eddie The Snowball!!

Graphically, I'm impressed by Super Ski which nicely presents an Olympic scene. Everything flows at a frightening pace and possibly too fast for my old eyes that desired less speed and more frames. We even have foolish spectators standing in dangerous places just waiting to be splattered. Actually, it's good that they're there because I'd probably go snowblind in this white world. But I shouldn't complain because this is brilliant for 1988.

Audio is less impressive with the YM2149 trying to make swooshy/sliding noises and penalty alerts. It's fine but could have been far better? Sadly, there are no chiptunes to bop along too, either in the menus or during play. 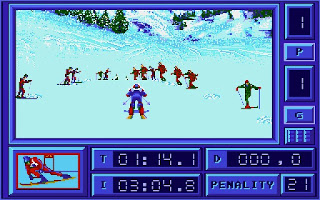 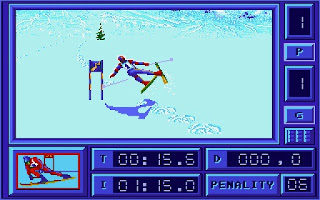 Looks like the fans are enjoying it? I wonder if I can entertain them as much as the real Eddie... Yup!

You know me, sports games aren't really my bag, baby. I enjoy certain motorsports and even a few beat 'em ups, but I admit to being pretty much meh about athletics. Super Ski is fun but I am concerned about its lack of variety and felt we needed "more" to set apart the events - like a bobsleigh or even curling!! Of course, they're not exactly Eddie's chosen events, but this would have added a lot more to the game which feels quite restricted.

However, I will say that this skiing game really impressed me. The controls are perfectly responsive for each frantic event and the feeling of zooming downhill is a thrill - it's almost like a snowy version of Vroom! Also, the training mode is a Godsend to help brush up on your skills before foolishly jumping into a competition. Overall, Super Ski is great especially when playing against the family - and we had a laugh - so this is highly recommended.

This Eddie version of Super Ski was a tough find... Thankfully, AtariMania had the correct download.