Of all the games in this wonderful Super Pack collection, it is (ironically) Atari's own Marble Madness which I was looking forward to the least. I've never played the arcade original but I did have a number of clones back in my Sinclair ZX Spectrum days - and I hated every one of them!! So, we're off to a good start lol.

This ST conversion was programmed by Will Harvey, which shocked me somewhat. After all, this is the guy who gave us the excellent Zany Golf and The Immortal so my expectations were always going to be high.

To be honest, I find the whole Marble Madness concept pointless and very frustrating. I've simply no patience to spend any amount of time on something that was obviously designed to torture people like me. However, I must keep an open mind and attack this game just as I would any other... Maybe I've been wrong all these years? 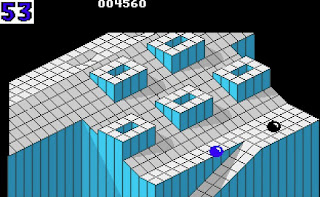 The first level looks good but is a cheap imitation with missing decals.
Level two introduces us to the enemies - a black ball that loves to play chase... Weird!

The aim of Marble Madness is to navigate a ball through six wacky isometric mazes that feature lots of tricks like moving platforms, vents and even "monsters" that zap you for valuable time loss. Yes, there's a timer so, the quicker you complete each screen, the more time you accumulate for the next. This idea is pretty cool and forces you to master each level the best you can. Or you could play coop head-to-head which I thought worked well.

The controls are awkward, so it's now you will probably miss that trackerball? Sure, I've no trackball myself but I found the ST's mouse to be nothing less than useless as I wildly zipped about in every direction except the one I wanted. The joystick proved to be the better choice for the diagonal movements and holding down fire delivers a burst of speed. This is good to climb slopes or avoid baddies - just try not to fall over the edge!

Sadly, the controls aren't without their quirks and sometimes it felt like my blue ball had a mind of its own: many times I'd move one way only to see it go another! Plus there are bugs, lots of bugs: for example, level two features an invisible wall which your ball can ignore and drop down into oblivion. Level three crashed on me twice! 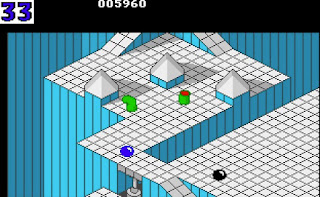 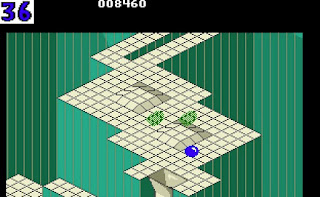 Okay, I've dodged two wibbly things... but... Oh no, there's another black ball ready to chase me!!
Those green blobs are slow and easy to beat. Hang on, what's that vent used for...?

Graphically, I expected better from the ST. Just look at its title screen if you don't believe me - what were they thinking? The game itself resembles the arcade levels but feels rushed with missing decals, bland colours and weak shadows. It's pretty rubbish when compared to other isometric games I've enjoyed on my Atari ST.

Audio is quite poor, the sound effects barely resemble the original and the music is irritating at best. 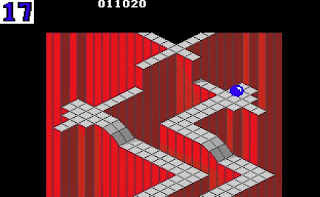 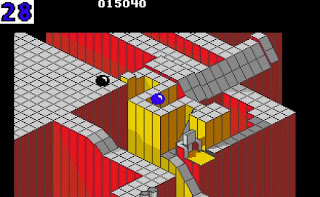 Level four has some of the most infuriating moments which had me screaming at my poor ST!!!!

Okay, I know that I've never loved Marble Madness - but - I have kept an open mind. Honestly, I've tried my best but time has not healed my wounds and it failed to deliver the slightest hint of enjoyment. Also, the ST appears to have received an incredibly lame conversion that feels rushed and is riddled with silly bugs.

Marble Madness is the weakest game in the Super Pack (so far) and yes, it's even worse than Chopper X so I don't think I'll be booting it up again anytime soon. Sorry guys, but I absolutely hated this with a passion!!


Those wishing to endure torture can download the floppies or a hard disk version. Good luck...