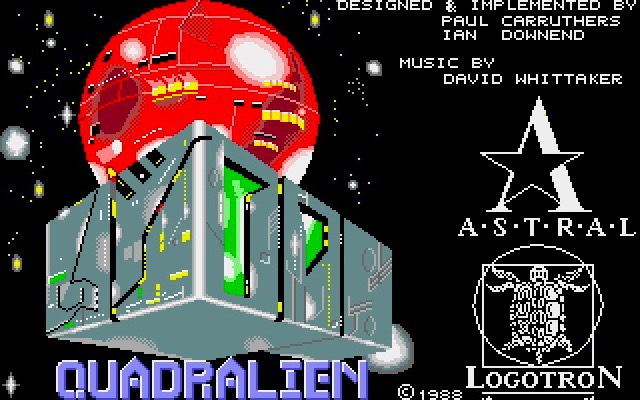 I must admit that Quadralien wasn't something I was looking forward to. I remember being completely bemused by this puzzler back in 1988 so I was dreading booting it up again - and having to write something interesting!! So, cautiously, I inserted the floppy disk into my beloved Atari ST and braced for an embarrassing moment of gaming torture. I only hoped my nightmares didn't return to haunt me - at my age, I need all the sleep I can get!!

Quadralien is an action-enhanced puzzler released by Logotron and, once again, we find ourselves on-board a spaceship that's about to go into a nasty radioactive meltdown. This time it's thanks to a pesky race of Quadraliens who must be stopped before everything goes boom. Next time, I think I'll just stay at home... 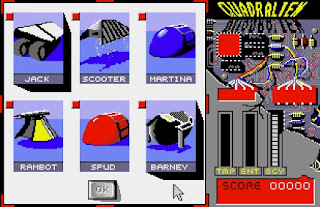 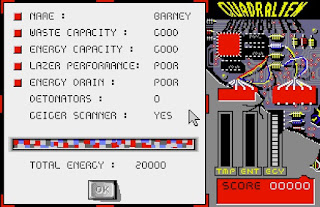 Click the red square to see detailed information for each of the six droids. Choose wisely!

Each level is viewed from above, Gauntlet-style, and we control two droids that need to clean up the Quadralien's mess. Actually, there are a total of six droids but only two are usable at once. Each has its own individual characteristics to take into account: magnetic structure, the ability to carry waste, battery, weaponry...

Initially, I found this unnecessary because I felt blind in terms of planning ahead for an unknown level. It didn't seem to work very well... However, I later found a fantastic series of videos by sushicalmagi who nicely explains each droid along with the basics of the gameplay. It's worth watching, especially if you have no instructions manual! 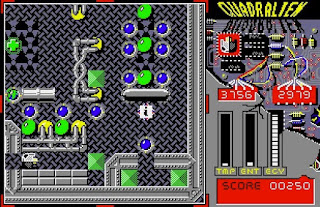 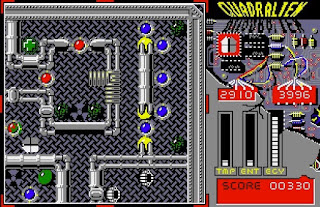 So much radioactive stuff to zap or pick up... use those "I" terminals to see the services it offers.

Six chambers make up a level and their objective differs: in the first room we are tasked to clean the radioactive materials to lower the temperature but the later levels involve puzzles to tax the old brain cells. Quadralien uses a passcode system to lock the harder levels which I thought was a neat idea for the long run.

Okay, my first game was quite the mind-blowing affair because there's so much clutter on-screen which bewilders!! My advice is to take it slow and experiment with your droid: familiarise yourself with the room, find water, play with magnetised objects, zap/collect toxic waste - and use the console. Actually, these terminals are excellent and stuffed full of detailed stats, full toxic decontamination, and can also recharge your battery to full power. 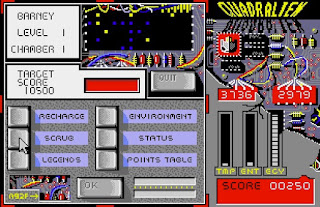 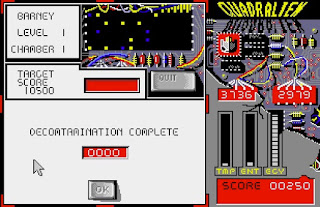 The console is your best friend who can help out in a number of different ways - like a good scrub!

After a couple of games in, things began to fall into place and I was enjoying myself. Getting around is easy using the joystick and it's a lot of fun zapping the nasty stuff with your laser. Also, the spacebar is used to collect toxic waste and hitting F4 activates a nifty Geiger counter on all lucky droids. F5 flips between your two chosen droids and F3 allows you to pan your location without moving, which is more useful than you might first assume...

Also, there are some rather odd magnetic mechanics which can be useful, annoying or humorous and that depends on your choice of the droid so learn your environment before blindly running around. However, there are other objects to be wary of like magnetic tracks, forcefields and those impetuous Quadraliens! 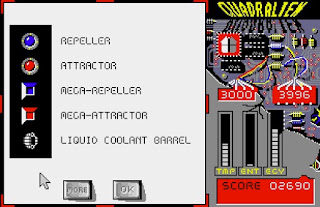 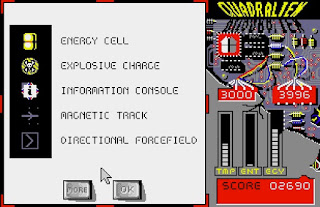 It's good to know your environment and Quadralien is bursting with much to learn. Study hard!

Graphically, this puzzler is pretty amazing and I liked its crisp, clean design using bold colours. It's quite futuristic in some ways and reminded me how I thought a 16-bit game would look - back when I was a ZX Spectrum guy. Okay, I'd have like scrolling but the flick-screen method works nicely and I'm thankful push-scrolling wasn't used!

The sound effects are great but it's that funky Dave Whittaker music which wins it hands down. Listen...


Any David Whittaker Atari ST tune can be played directly in your browser thanks to SNDH Record.


Okay, we're now at that point where I write why I loved or hated a game. However, I'm doing something a little different today because of Quadralien's enormous learning curve which I initially failed to master...

If I'm honest, I never fully got to grips with Quadralien. Not nearly as much as I'd have liked but something was putting me off. The idea is interesting but also overwhelming and I found the concept of using different droids rather irritating. This is one of those puzzlers that I fear others, with a cool temperament and lots of spare time, will enjoy the most. Whereas I'm that guy watching on, totally gobsmacked, and wondering what everyone else sees in it...


So why did I leave in my obviously premature conclusion? Well, sometimes we're quick to judge and I feel I fell right into that trap because I didn't master Quadralien's massive learning curve. Anyhow, I recently took a week off with the family to eat, drink and walked the fells of northern England. I returned fresh, raring to go, and booted up my ST to give this puzzler another shot. You know what? I actually enjoyed it for the first time in over 30 years!

Quadralien may offer the usual end-of-world scenario but it also feels very different and with some interesting mechanics. Sure, there's a huge learning curve, but I suggest trying your best to master that otherwise you'll do what I almost did and miss out on nothing less than a class Atari ST puzzler. This is brilliant. Dismiss it at your peril.

AtariMania has the floppy download and 8BitChip obviously has the hard disk version. Enjoy!!