I've been given an opportunity to playtest the latest alpha v1.2 update of Frogs by Thomas Ilg. I previously featured this cool game what feels like a lifetime ago, but Thomas didn't stop there and has made some improvements: faster code, additional Atari STe features and some interesting ideas - along with some I didn't like!

Anyhow, I've had a play and reported back my thoughts. It was long before I was given an updated version... 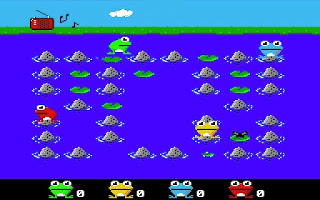 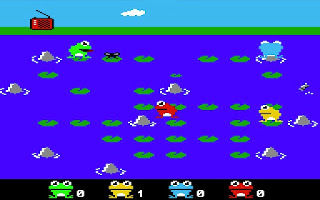 It's crazy with four froggies hopping around the screen and the C64 graphics are superb!

One of the new enhancements is scrolling. Yup, the playfield (umm, pond) now scrolls on the Atari STe and, in my recording, you can see how this works. It's a treat and I (mostly) loved it. However, I thought that the single-player mode needed to scroll more because it felt somehow restricted and limited (to me). So a new "Single Frog Scrolling" option has been implemented for one-player and this also includes the C64 mode. Absolutely incredible.

Of course, purists will be relieved to hear that the scrolling will be an option selectable from within the game's menu. Yup, it won't be forced on anyone which I personally think will please folk from all corners? Well, I hope so! 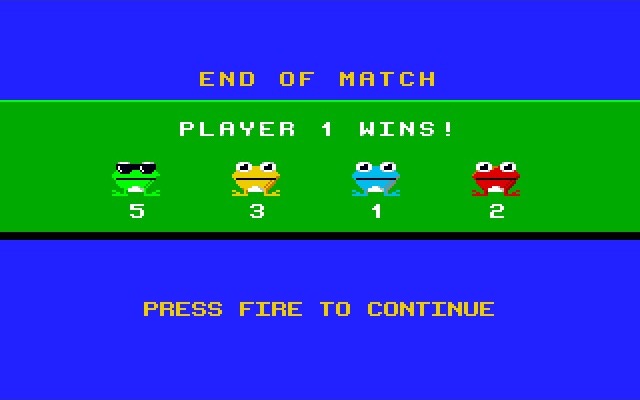 Steve the frog always wins because he's the greatest!! :o)

The graphic modes are going to shine alongside the recent (and staggering) framerate improvements when running on the Atari STe - we're talking 2VBL / 25fps. I'm also happy to announce other minor improvements that are in the pipeline, like the decals which I thought desperately needed changing - I'll keep Thomas busy!!

Frogs is a brilliant game and my sneak peek into the stuff #InDev is proving to be extremely fascinating. For me, the option to scroll the screen is a fantastic idea and it is implemented really well. But I'm more happy to see Thomas is not restricting the Atari STe by the limitations of either the older Atari ST or the original C64 game. Yup, he is pushing the Atari STe constantly so I'm really excited to see what's coming next. Watch this space folks...


If you've been living on another planet and missed out on this amphibious wonder then I suggest you head over to AtariMania and download it right now. Sorry, but you will have to wait a little longer to play v1.2 :-)

Email ThisBlogThis!Share to TwitterShare to FacebookShare to Pinterest
Labels: 2019, InDev