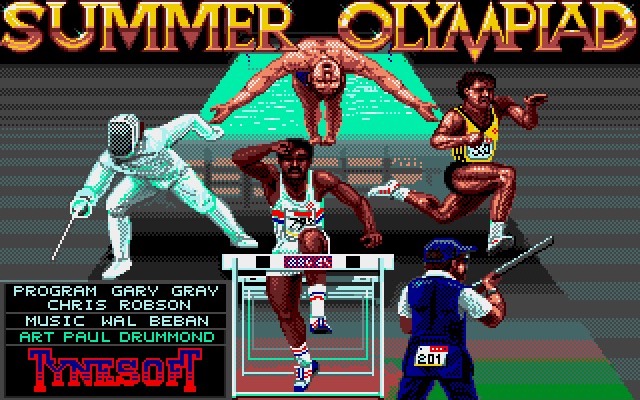 Who'd have thunk it, yet another sports game here on the Crypt - a website by the least sporty guy on the planet! (Hang on, I enjoy watching NASCAR... Well, from the comfort of my sofa!). Okay, here we have TyneSoft's 1988 hit Summer Olympiad which features five Olympic events to compete in - either solo or against friends.

Firstly, you're probably thinking the same as me? Five events! Yep, 1988 must have been a poor summer or maybe the TyneSoft guys got bored? Who knows! Anyhow, up to six players can compete against each other through a selection of athletic events and they are Skeet Shooting, Diving, Triple Jump, Hurdles and Fencing.

Well, before any of that malarkey we should first find a busty girl to light that Olympic flame... (click the image)

Well, that's how my mind works... But I must say, I love the billboard screen showing each event!!

Skeet Shooting can be controlled using either the joystick or the mouse - but please chose the mouse! The left button launches a clay pigeon(s) and your right button fires one desperate blast into that direction. Quick reactions and accurate movements are required otherwise you begin shooting at the empty sky. And I did that more times than I care to admit. It's quite difficult... ahem! 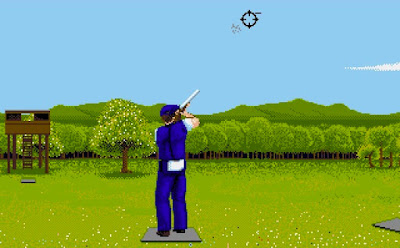 Wow, my aim is terrible!! Still, it's really good fun trying to shoot the discs.

Diving is really silly yet brilliant. Never have I seen someone fall in slo-mo and from such a massive height! Moving left/right rotates the diver as he falls, whereas up/down tucks him up. A well-timed splosh produces the best scrores, somehow... But I really enjoyed this event. It's great fun! 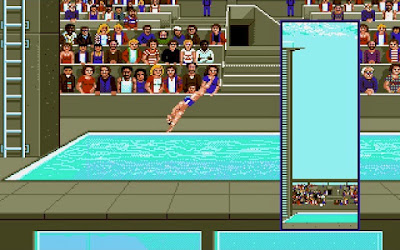 After falling 50 miles you think the crowd would be more enthusiastic!

Triple Jump is a joystick destroyer so get waggling to make our little athelete run like the clappers. However, that fun soon ends because I think TyneSoft deliberately did everything they could to sabotage any enjoyment thanks to the stupid controls: fire-button alters the controls to change your runner's angle by pushing up/down. It's pretty weird and ruined the event for me. 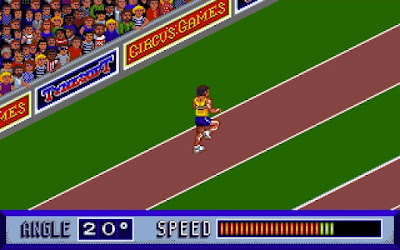 Hurdles was a pleasant surprise because I expected more 2D but instead we're viewing the event using a third-person perspective. Joystick waggling is still the order of the day with the fire-button used to perform a flawless leap over the hurdles. Well, if you practise because it's quite hard to judge. Personally, I think having a simple shadow at the runner's feet would have help a load - and save him from lots of leg bruises... Finally, don't forget to lean forward when crossing the finishing line! 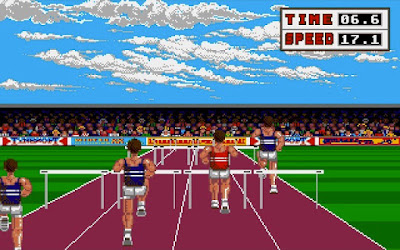 I'd be great at this if the objective was to kick down each and every hurdle!!

Fencing sounded like it was going to be good but controlling my dude felt somewhat disconnected from what I saw on the screen. So it appers pure luck if I made a hit but then I fell asleep!! Yeah, this is a bit rubbish if I'm honest and I didn't care for it. So definitely the weakest of all five events. 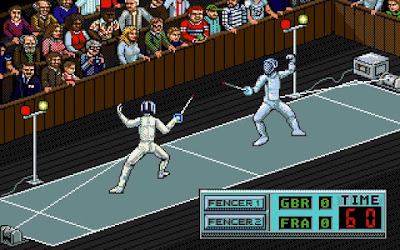 Boring... It's time to whip out a shotgun and blast your opponent!!

The visuals are by Paul Drummond and I must say that I really liked what I saw. The sprites are good with acceptable (wooden) animations but scrolling is smooth, and the 3D Hurdles is pretty impressive so get waggling that joystick. Yep, it's all good but oddly, I quite liked the event's loading screens the most - especially Skeet Shooting!

Chipmusic is by Wally Beben and totally superb, especially between each event. Sadly, I only wish I could say the same for the sound effects which fail to show us what the YM2149 is capable of. I'm sure there must have been enough spare clock cycles for a few rough samples? That would have been so much better... 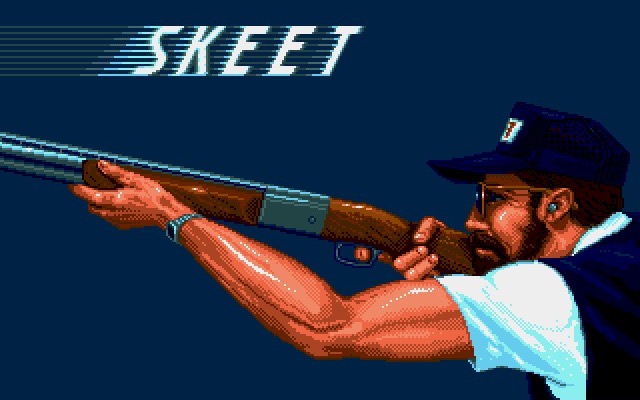 This image is my favourite. Brilliantly drawn and I think he looks like Chuck Norris! 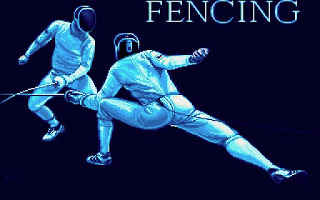 There might be only five but each event has something for everyone. However, it's a mixed bag with Skeet Shooting being the best, closely followed by Diving and Hurdles. Sadly, the Tripple Jump is awkward and Fencing is plain boring. I think if you are going to feature so few games then they all needed to be super-duper perfect?

Overall, this is a cracking family game which we have enjoyed - even if my daughter completely fails to grasp the concept of waggling a joystick! (Kids!). Anyhow, Summer Olympiad is definitely at its best when competing against family/friends otherwise it's all over with too soon. Good, but could have been better with more content.


Remember to do warm-up stretches before downloading this game for floppy or hard drive.