Gauntlet is an arcade masterpiece with a basic design that is simple, yet genius. It's a combination of a dungeon crawler with an extreme kill-em-all mentality which results in an unstoppable solo or multiplayer experience. Yep, 1-4 people can enjoy hacking and slashing their way through tons of hellish underground levels!!

We are offered an opportunity to play as one of four groovy heroes: a Warrior, Elf, Wizard, Valkyrie and each have their own characteristics for strength and battling the nasties. I personally go straight for the Warrior because he's bound to be the Samson of the group, and thankfully there is no Delilah. Each character needs to be fed, so don't be doing anything daft like shooting food which will have a serious effect on your health.

A timeless arcade classic. Simple as that really.

The object of Gauntlet is simple - kill and escape. Trapped in a 100-level creepy dungeon and everything lurking inside wants to eat you. So it's up to you (and any potential co-op players) to kill everything and find the exit in order to ultimately escape the hellish catacombs. Keys are littered everywhere which unlock access to restricted areas and you shall also note the booty which is conveniently left for you, collect them for extra points.

The monsters are some of the most varied I have seen which adds so much to the dungeon feel. We have ghosts, demons, grunts, lobbers (I hate those!) and more. They all have their own evil attributes and almost all born from something called a Generator - so destroy these first to cease the onslaught of hatred against you. 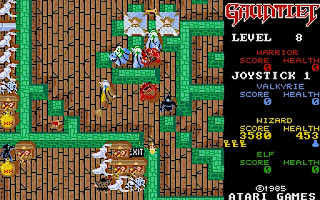 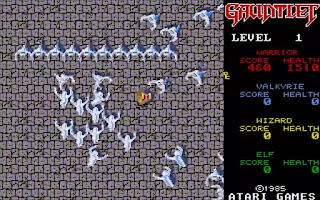 Whether demons or ghosts are attacking - this game is freakishly GREAT fun!!!

Finally, Death is here. Yep, literally Death himself and he is almost impossible to kill so try to avoid him if possible. Which brings me nicely onto the magical potions you can discover scattered about most levels. By collecting these your chance of survival is greatly improved and will certainly help during an encounter with Death. Hint: do not assume he is a single individual making a single appearance so be wise with your potions.

Whether you're solo or mp, this is an awesome shoot 'em up. Gauntlet is one of the best arcade games ever made and the Atari ST has yet another winning conversion under its belt. It's pure retro gaming gold and I love it.


Stop whatever you're doing and download this wonderful game via Klaz' Hideaway (both hard drive & floppy versions). Klaz has implemented support for faster Atari computers and my own Mega STe (16MHz) delivered a far better framerate which was mind-bogglingly ACE!!

Email ThisBlogThis!Share to TwitterShare to FacebookShare to Pinterest
Labels: 1986, Action