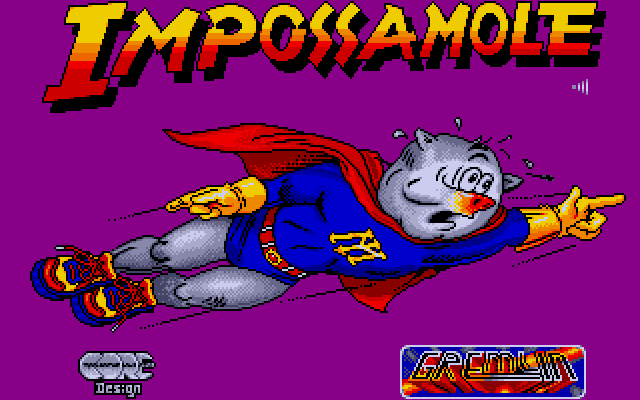 I loved Monty Mole on my ZX Spectrum and, naively, I expected more of the same from Impossamole. However, I was soon shocked to see a number of critical changes had been made and not always for the better. There are now five huge levels to explore and you can begin on any of the first four, but the fifth is locked until all these are completed. Each is very different with their own unique environment, bad guys and cruel traps. Monty can fight back using weapons and karate kicks but gone are multiple lives in favour of just one which uses an energy meter. Most shocking of all is the absence of flick-screen gameplay replaced by [albeit lovely] smooth scrolling.

Playing Impossamole started off as an exciting stroll through memory lane and this old retro gamer enjoyed many familiar sights. However, the fun soon ends thanks to the game's basic design mechanics which fail miserably. The environments might look nice but they are all incredibly hard with too many tricky enemies that seem to know your next move long before you've even thought about it. These guys are either difficult to avoid or nigh on impossible to kill (without losing energy) but at least you've got a super weapon to fall back on when the going gets too tough!

Graphics are literally beautiful with fine details, nicely animated sprites and smooth scrolling. This is exactly how I'd have loved Wanted Monty Mole to have been back in 1984! The title music is a beautiful rendition of the Rob Hubbard classic and is literally chiptune magic and something I could leave playing. Sadly, the same cannot be said for the sound effects which are okay but sparse, so fail to mask the lacking in-game background music.

Essentially, this platformer is superb but it's just too darn difficult (at least for me!!)

I really don't know what to make of Impossamole. Technically, it's a well-programmed game and has great visuals and joystick controls. However, it's simply far too frustrating and having just one life is a stupid idea which will only force everyone to use a cheat. Sure, I can accept that there had to be changes made compared to the originals but I fail to see the attraction here as Monty's legs are too short to kick effectively and the weapons are a rubbish idea.

Impossamole could easily have been another Rick Dangerous for Core but alas it's the weakest Monty in the series. In fact, I tempted to add Impossamole on this list which I recently made!! For me, I'm very disappointed but, if you're feeling curious, then floppy disks can be found via Old Games Finder and a hard disk version by 8BitChip.

Email ThisBlogThis!Share to TwitterShare to FacebookShare to Pinterest
Labels: 1990, Platformers