June 6th 1944. A moment in time which I'm sure we are all unable to comprehend and will never forget.
This video and review is just my humble way to say thank you to those who have served.


Okay ST nutters, I bought myself a mint copy of D-Day by US Gold a couple of years ago. This game comes with four disks, so is a pain to someone (like me) who's been spoiled by the luxury of his Ultrasatan. However, I couldn't find a hard disk version anywhere so I did what any sane person would do - I asked Peter Putnik.

Later, during the World Cup and a couple of beers later, I finally had myself the hard disk adaptation of this wonky old war game. Launching it from my satan is a dream compared to the floppies and I'm really grateful for Peter's commitment to the ST scene. Anyhow, what did I think of this US Gold's take on this historic moment in time? 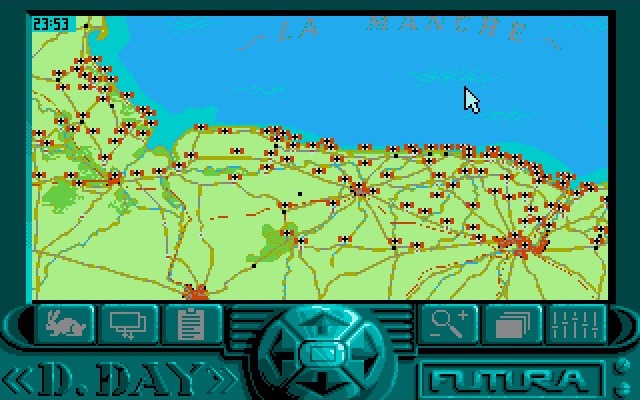 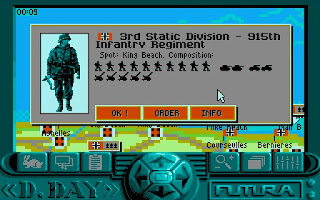 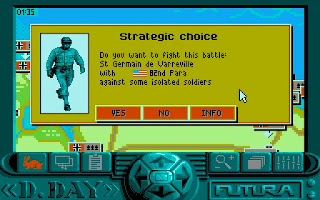 Overlord offers a crude yet incredible insight into the situation on the day. Quite frightening!

D-Day is represented from a map of Normandy during the period and shows just where the enemy is located and the missions which can be planned and executed. This is like a campaign mode for the entire Overlord Operation and has each event featured by time as they unfolded. However, it's quite confusing to newcomers and even the manual recommends you start by playing the individual missions first. Which is just what I did.

The idea of these mini-games is pretty cool and they are broken up into four categories: Tank, Bomb (flying the most sluggish planes ever!), Paratrooper, and infantry soldiers. This is actually brilliant because it allows you to skip directly to your favourite parts and, no matter which you prefer, there are several missions to choose from. So, read on...

The big boys are here and we're looking for a fight...

Sheesh, I go for a wander and the enemy sneaks up on my buddies!

Tank is a WWII take on the Battlezone format and also looks rather like another ST title, possibly because they share the same programmer, Pascal Jarry? There are lots of different missions and the first instructs us to destroy ever bunker on the beach, which is a lot harder than it sounds! There are a load of other missions to pick from but it is quite buggy and I suffered a few crashes. At one point I even managed to get myself stuck in a tree...

It's sluggish and lacks any kind of engine noise (which is just weird) but I have to admit that I had myself a little fun driving my little tank. Make sure you hit the function keys for the different modes of operation and also a cool outside perspective. Overall, it's worth playing a couple of missions but also feels like a rushed add-on if I'm honest.

My rating for Tank would be fairly average if it wasn't so buggy (and difficult!) so I will give it a 4/10.

Wow, I really don't know how to describe this part of the game...

Bomb is an eye-opener alright. How on earth this got by the US Gold quality and control debt I do not know. I think they didn't have one? lol. Again, there are lots of different missions and I chose to fly at night to bomb a bridge. Well, that was theory anyhow but I literally had no chance of hitting that thing. Not in a million years.

There are some basic instruments and controls to help you with your noble adventure but you're left feeling blind which makes completing any mission nigh on impossible. Also, to say its 3D is sluggish is a major understatement - I reckon an old Oric 1 could do better. Definitely, the weakest game and I can't say I'll be playing it again.

I'm struggling not to be too cruel here but I cannot help myself and I must rate Bomb a 1/10.

Weeee one man gets tangled and falls to his death but the others land safely!

Paratrooper is quite silly in execution but really good fun. It has us parachuting either solo or with other troops through a series of missions. Wind can obviously play a factor (no jokes please) but guiding your men down is always great fun. Sure, it's ludicrously bad but very enjoyable and my daughter loved it which is always a bonus.

Overall, unlike the Bomb game, this is something you need to play. Well, at least a couple of times...

Simply for its oldskool entertainment, that I personally got from this, I'm giving it a 6/10. 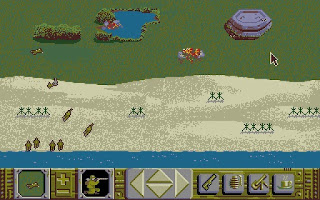 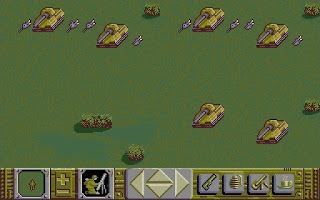 We're on the beach in one mission and then raising everything to the ground on another!

Infantry is the final game type and easily my favourite. I've always liked overhead strategy games and this is styled in a similar fashion to some action games I've played, such as Cannon Fodder and Rebellion. However, don't be fooled, it might look similar but is more a slower-paced tactical wannabe where stealth is the key to your survival.

There are a bunch of missions which involve us guiding stickmen through the fields avoiding enemy bunkers, tanks, and so on. It plays as crudely as it looks with enemy AI that's more like a robotic turret. Each enemy unit has its place on the map and, once you're spotted, they constantly bombard that area forever. They never stop!! So it's your job to sneakily find an alternative route and pick 'em off with your machine gun, grenades or mortar.

The controls are quite shocking and unresponsive. Trying to get your soldiers to stand exactly where you need him is half the battle. Also, it's annoying when they take the long route around an obstacle, which often means that they are then in the line of fire - and die! Graphics are quite umm Cannon Fodder'ish but very crude. Now, I might be a really bad pixel artist but I honestly think I could have done better? Sound effects are made from crunchy samples and certainly, add to the atmosphere but that constant noise might give you a headache after a while!

However, I should stop my snowflake whining because, in spite of all its faults, this is incredibly great fun. It reminded me of Stonkers but Infantry is really all about finding a safe route through the map to pick off the enemy one-by-one. Very simple and not much more to it, but I genuinely enjoyed myself. Yes, I know, I'm mad.

It's lame and ridiculously unrealistic but I've strangely had many hours of fun so I'm giving it 8/10.

If there was ever a mixed bag of goodies then this is it. Don't get me wrong, I'm proud to have this in my collection but D-Day feels like it was programmed by amateurs, which is odd when reading the credits [AtariMania]. Technically, this fails to make any decent use of the Atari ST hardware - and is riddled with sluggish and buggy code.

So, it's crude, it's buggy and it's a little silly but I gotta admit that this is still a good war game. Plus the Operation Overlord parts have so much depth which will offer any eager gamer with a unique historical insight into the events. It's tacky but I thoroughly recommend playing D-Day especially on what is such an important day in history.

Email ThisBlogThis!Share to TwitterShare to FacebookShare to Pinterest
Labels: 1992, War