You're on Tessera, a world once rich but now suffering famine, disease, and a crime wave that only Robocop could fix. Their god, N'Gnir, strangely seems to be in slumber so it's your mission to find him, wake him up, and put an end to all the madness. It won't be easy because you must battle your way through the numerous different lands and each has eight kingdoms. This game is huge so pack some butties because it's unlikely you will be home for tea...

We begin from the comfort of our own castle which looks impressive from the outside but rather sparsely decorated within. Leaving here reveals the strange chaotic world with most of its populous being completely barmy. Almost all encounters feature a pebble fight to the death without any purpose and these brawls are all too frequent! 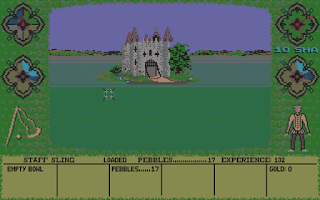 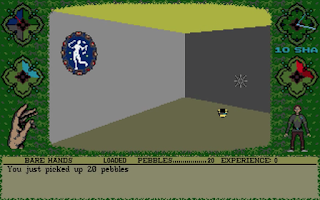 From the outside, your home looks awesome but inside it's obviously furnished by a guy...

Thankfully, a few characters are normal and these are the guys you should take the time to talk too for helpful information. As the box says, this isn't just an adventure game and is full to the brim with action and basic puzzles within a curious new world. There are many puzzles to be completed such as feeding a giant critter with mouldy cheese. These aren't brain-blasters and the information you acquire will soon fall into place if you talk to the right people. Oh, and look out for the rather odd level guardians...

The first-person engine is fast but the landscapes are sparse with distant objects being nothing more than fuzzy pixels - until close. The title music is chiptune magic but in-game sound effects are as sparse as the landscapes. Controls are perfect - mouse looks or moves but do also use the keyboard for a fantastic combination (not seen in the video). Hint, pressing F3 allows you to run rather than walk and I found this to be the greatest benefit. 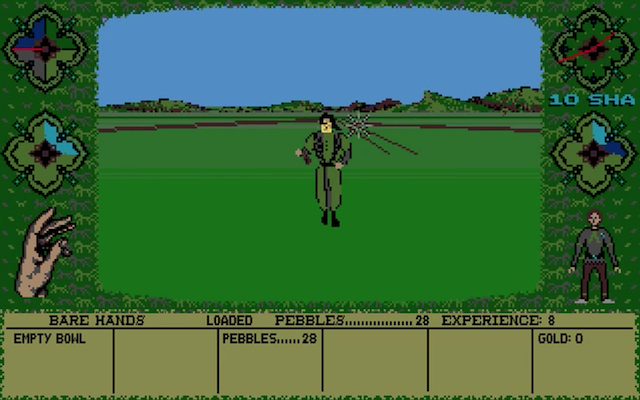 This ain't a peaceful land and most love to start fights by throwing pebbles like a child!! 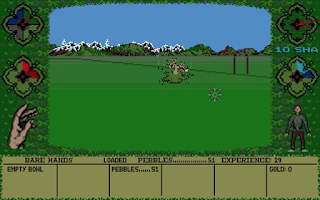 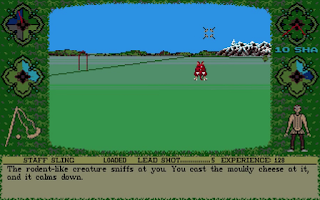 Sleeping Gods Lie has some very interesting ideas but it's not perfect and the weird battles are initially funny but soon wear thin. However, things get better once you've found the slingshot. For an adventure, the character integration should be more inclusive but often fails to entertain and feels like it was added at the last hour.

Overall, there's no denying this is an enthralling adventure and I loved exploring the lands but was disappointed by the visuals which felt abandoned in content. However, if you have lots of time to set aside then this is definitely something to dig your heels into over a quiet weekend. Flawed but an enjoyable experience.

Email ThisBlogThis!Share to TwitterShare to FacebookShare to Pinterest
Labels: 1989, Adventure/RPG