Power Up + is an overhead scrolling racer by Marek Cichon of Empty Head. However, my first impressions weren't good because it felt like a cheap Super Cars clone - at best!! Well, I never go off first impressions and took the time to configure the many options to playtest it properly through rigorous practice sessions. This is a tough job running AtariCrypt you know, but it wasn't long before I was ripping around the tracks and wearing a big smile.

There are a lot of tracks with various conditions to endure like the type of road, weather and I really enjoyed the wet tracks for sliding around the bends. Okay, it's hardly Ridge Racer but it's still great fun. Weapons are supported and each car has the ability to fire the world's slowest "rocket" which somehow always manages to hit me! Also, watch out for oil spills left behind by the other drivers that will have you slipping and sliding like a crazy fool. 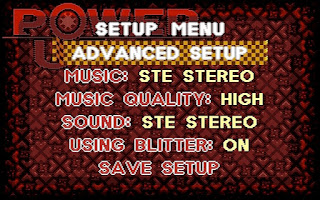 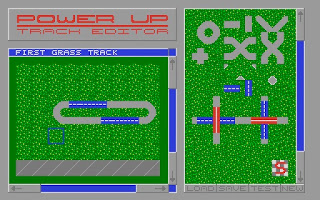 Take time to configure Power Up to suit your particular computer. And use the editor!

Controls work very well: acceleration is automatic through reverse and two forward gears. Top gear that allows you to hammer past the other vehicles so you better practise your cornering! Strangely, weapons are activated using the keyboard which may be awkward for joystick players? Successful racers will be rewarded with glory and a massive golden cup - before strangely being sucked down into the ground. I don't get it but it's ludicrously funny!!

Graphics are pretty much homebrew but extremely well detailed and even makes use of the Blitter chip if you have one (all Atari STe computers do). Sound effects can be either chip of DMA and I personally prefer the latter. The music is in stereo on the Atari STe with frequencies going all the way up to 50Khz - astonishing!! 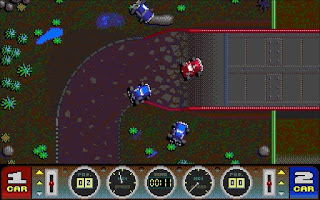 I love the humungous variety of different tracks and they all look pretty darn cool.

Sadly, the stock ST computers will fail to run the game adequately, especially if you start playing around with the settings. You'll only find yourself glaring in envy at anyone owning a faster computer. Yep, Power Up needs that Blitter and loves faster computers with extra clock cycles. It's a greedy monster, so feed it to get the most out of it...

Overall, Power Up has more than its fair share of quirks but it's fun and something I have genuinely enjoyed playing - if you have a computer running at 16MHz or more! Surprisingly, this has turned out to be one of my favourite homebrew games and there's even a track editor for the creative folk!! Master the controls to enjoy lots of Super Car-esque thrills and it won't be long before you're racing (and sliding) around the tracks like Dale Earnhardt!! 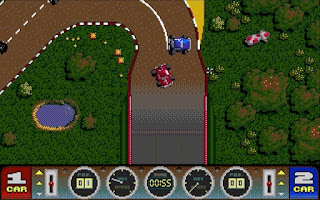 Gotta love the pile-ups and then one drops oil just as you think you can escape their clutches!


I decided to contact the developer, Marek Cichon. His website had been online years so I expected to hear nothing but, within minutes, I had a reply! We chatted and I asked a few questions along the way...

Why did you create Power Up and what inspired you?
- I liked frantic racing games - Rally Speedway on Atari 800 plus track editor.

What did you get from the TOS platform during this time?
- 6 years of fun and development overnight!

Did Power Up live up to all your expectations?
- Unfortunately not. It is the homebrew game with a look developed mainly by two friends from the small city Chomutov. We would be successful to release the game till 1992.

Anything planned for the future?
- We have released another game with the similar graphics for PC called Pixoria (see pixoria.eu)

What Atari computers do you own?
- American NTSC version of Atari ST from 1985 year (my father bought in in Houston, Tx). I have developed most of my programs, including Power Up, on this computer but using on PAL TV. This meant black and white, unstable display (TV 50Hz, Atari 60Hz). Also a European Atari STE with 2 MegaBytes extended memory!

Are you planning any Power Up updates in the future?
- No. There were two releases Power Up and Power Up Plus with better graphics, shooting and oil slicks to finalise the game.

What retro games are you playing in todays crazy world?
- I prefer the older Atari 800 games like The Great American Cross-Country Road Race, Rescue on Fractalus, Electra glide.

Are you listed on Demozoo?
- No, it is Karel Rous (Empty Head), my distributor. I have never met him :-)

What makes Marek tick?
- When people contact me from Australia, Mexico or UK. Those who play Power Up with my compliments. Thank you Steven.