Little iddy biddy Oids are our robotic friends but they're being mistreated in a terrible way by their evil creators, the Biocretes. They are now being held prisoner on various remote planets located in the deepest parts of space without any noticeable atmosphere - yet strangely trees still managed to grow! Oids is written by Dan Hewitt and was unleashed unto our populous in 1987 by FTL. For years it remained an Atari ST exclusive title until 2002 when the Apple Mac received its conversion. (the older PPC Macs and not the newer Intel Macs, sadly)

In a similar fashion to Thrust, you need to navigate a spaceship through caverns searching for our metal friends. Use weapons to destroy the buildings holding them captive and find a place to land so they can get on board. Now, sit back and watch as the superbly-animated stickmen make their way towards your ship. Simple and elegant. Once all are found, your mothership appears high in the sky to whisk everyone to safety.

However, the Biocretes are pretty darn evil and have armed each planet with numerous hazards and artillery defences. Expect rocket launchers, gun turrets, repulsers, gravity bases and more. Everything can be destroyed, but don't expect a mothership or ground base to be easy. Sometimes it's best to fly away like a cowardly chicken! 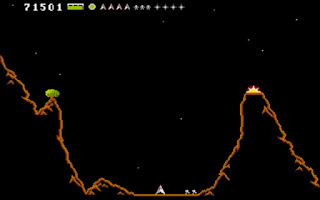 Stickmen are trapped inside that prison. Hurry up and get those guys rescued.

Visually, this game might first appear simple and without much to it. Well, you would be correct is in some ways. However, stop right there buddy boy, because this game is bang-on awesome. The outline of each planet's landscape is represented by a rough terrain which looks perfect. Buildings, turrets and all other objects are detailed so nicely. However, it's the excellent animation of those stickmen that makes my grin very wide!!

Audio is lacking in the chiptune dept - there isn't any! But we do get to hear the boing...boing... of the ball in a cool 3D intro. In-game effects are for your ships thrusters and guns - I love the firing sounds and other explosion effects are nice. There isn't anything more required and music would kill the dead-of-space atmosphere.

Every ST nutter loves Oids because it's excellent and features awesome level designs, great controls, and spot-on physics. Although there are several other similar games (which are all excellent) this still remains the best of the bunch. One of the most enjoyable games ever - Oids is supercalifragilisticexpialidocious!! 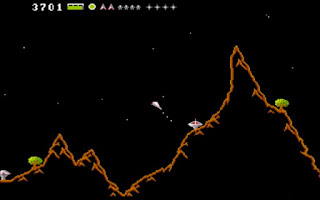 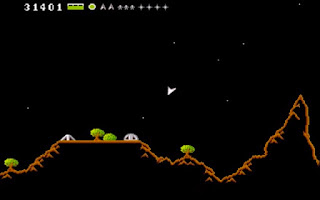 Roaming around planets is fun but later levels are very, very hard to master. Learn to pilot!

8BitChip has a download that can be installed to HDD.
Klaz Hideaway has a great download for both floppy and HDD.

Email ThisBlogThis!Share to TwitterShare to FacebookShare to Pinterest
Labels: 1987, Flying