Forgive my dodgy recording and check this out - possibly the best STOS game ever released?

Would You Adam and Eve it?

Rub your eyes all you want because I think we've done it? Yes, we've actually found a brilliant STOS game! Prehistorik was released in 1991 by one of my favourite gaming companies, Titus. Yes, I know they released a few dodgy titles but there's just something about them which I liked and they released some corkers. Like this!

Here we have what is nothing less than the cutest dino-platformer ever! We're taken back to a time long ago when dinosaurs roamed the lush countryside looking for food. Of course, we play the part of a plucky young caveman and we're armed with a club - imagine something like BAMM-BAMM from The Flintstones... but older... and with a beard. Now, add the psychotic desire to club cute prehistoric dinosaurs and you have the perfect game. Running leap onto a vicious dinosaur. Well, okay, hardly vicious and he is easy to knock out too!

The object is to explore a prehistoric world looking for food to feed your hungry family back home. This means we have the typical platformer to explore - running and leaping our way through a 16-bit Jurassic Park. Along the way are a variety of pitfalls and interesting places to examine: caves are always interesting as they often offer some goodies to consume along the way but watch yourself because these aren't normally vacant! Outside, lots of dinos are roaming and some are huge thus require several hits from your trusty club.

The visuals are pretty and cartoony in style: the backgrounds are incredibly well-drawn and each sprite looks absolutely gorgeous. In fact, it's the characters which I love the most because they are so funny and with their own unique personality. They wear some brilliant expressions, especially when knocked unconscious. 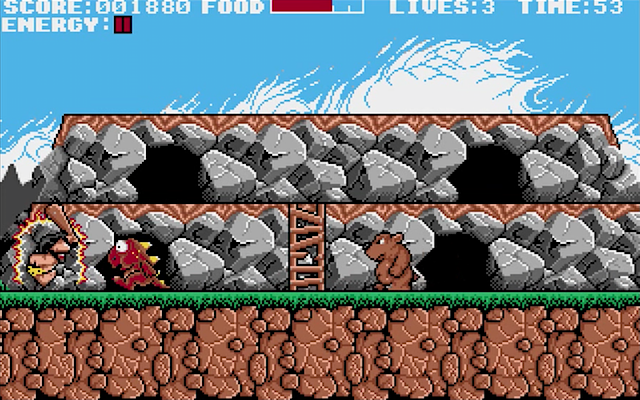 Watch out when near a cave entrance, you never know what might emerge from the darkness!!


Prehistorik doesn't really break the mould so I'm sure many might turn their nose up and prefer one of the other platformers available on the Atari ST. However, stop right there because this might be a no-frills affair but don't let that put you off. This is really good fun and stuffed with hilarious moments and plays so well.

It's almost like a Jurassic version of Grand Theft Auto and clubbing cute animals will always be enjoyable. Yep, this game is pretty basic at heart but it's also cute, violent and very addictive. So I say play it - but make sure you're wearing animal skins before deciding whether to download either the floppy or hard disk version!