Team is a soccer game released late in the day by a dedicated company called Impact Software in 1995. Specifically developed for the Atari STe, it makes full use of the enhanced hardware often ignored by other commercial gaming companies: extra colours, 50fps hardware scrolling, Blitter and DMA audio. Wow!! O_o

If I'm honest, I feel unqualified to review Team as I'm not a soccer fan. However, from what I have played, I was impressed. I'm hardly a convert but I did enjoy running around the pitch and having a good kick about! But not knowing the game's technicalities stopped me from progressing further. Interestingly, there is a friendly mode that displays much of the game's styles and playability, like passing, tactics, tackles... Hmm, sounds fun? 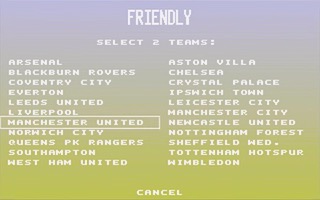 The left image is captured at the standard ST resolution of 320x200 whereas the game is played in overscan!

I'm sure you've seen the images, above, which cunningly shows just what Team has hidden up its sleeve? Yep, overscan is used to drastically increase the playable area - which I have tried to demonstrate by placing a menu screen alongside the actual gameplay display. Oddly, the footballer's sprites are quite small but their movements are extremely fast and the screen is fluently moving at a smooth 50fps. The STe proves itself once again...

Sound effects are good - when you hear them. Perhaps that's the norm but I found the stadiums eerily lacking in ambience. The kicking noises are weak and it felt like something was missing... Thankfully, the music is excellent with stereo tracker playback routines developed by a familiar name from the Atari ST demoscene - GRIFF!

Overall, I had lots of fun which shocked me because I hate soccer! Whether it's better than Kick Off or Sensible Soccer, I really couldn't say. But, I will say this, as a hater of this boring game, Team was seriously entertaining so take it for a kickabout and try it for yourself. If I can enjoy footy then I reckon anyone can! :)

Download from 8bitchip which has been adapted for HDD!
Old Games Finder has access to floppy disk images.
Team's author, Ralph Lovesy, was interviewed for Maggie #16.