Satan has been a bad boy and turned the world on its head so it's our job to reverse his dastardly deeds before it's too late. Developed by Optimus Software for Gremlin, we are Percius and fly on the mythical horse, Pegasus. Our adventure is split into two parts: Firstly, a shoot 'em up which has us riding Pegasus and it flips into a platformer where Percius is free to unleash his wrath using a large sword (it flips between these two throughout).

The shoot 'em up parts are quite good and challenging - just imagine something like R-Type, but on horseback, and you have the idea. Far from original, the baddies come at you in the expected patterns so make sure you hit the fire button and collect their crystals that they leave behind when dead. These enhance your weaponry and there are also lots of awesome power-ups too which try their best to brighten up a dull affair...

The platform parts follow and are much better - run, jump and leap your way through, collecting crystals and killing baddies once again... Yup, hardly riveting stuff but I still liked it. In fact, the mechanics are superb, so controlling little Percius is a cinch. I wish more platformers had great controls and fluent movement like this. 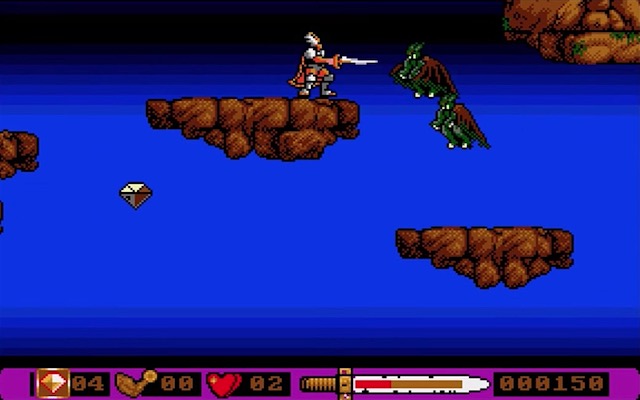 The platform part is actually not bad and could have been made into something really good... 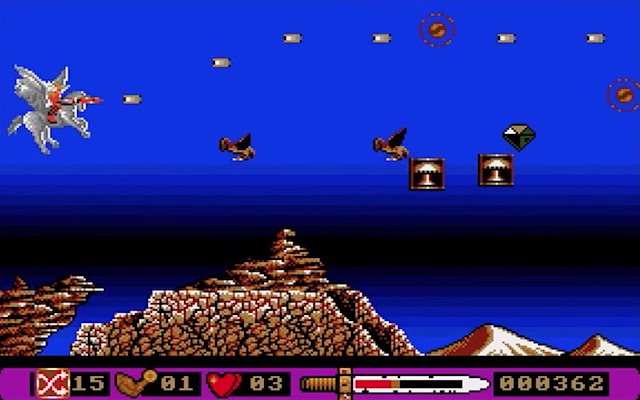 Collect those power-ups otherwise its Zzzzzz!! Play R-Type instead.

The graphics are bland and I fear a lame port because we all know that the ST is far more capable. There's nothing wrong as such but it's just so sparsely populated so feels a little too empty at times. Plus that blue background could have been far nicer. However, the scrolling is nice and smooth so at least that's something good!! Audio is feeble and it's only the firing noise which stops this game from being as silent as a ZX81!! Yawn...

Okay, let's not kid ourselves, this is lame Amiga port and a terrible one at that. It could have/should have been better so it's quite embarrassing. However, I gotta admit that the platform stages are still quite enjoyable but, possibly the best aspect is being able to ride on a flying horse - freaky stuff!! Pegasus had the potential - which wasn't exploited - and there are far better (shoot 'em ups and platformers) to play on your Atari ST.

Download and play Pegasus using a hard drive thanks to both D-Bug and 8BitChip. But those wanting the floppies can find 'em on Old Games Finder. If the game is too hard (or boring) then here are some nifty cheats: press P on the title screen and type in this code: FRUITBAT

To view the greetings, enter this code as a password on the title screen: CATFOOD.