Nebulus was released in 1988 by one of my favourite gaming companies, Hewson and features an armed frog with big eyes called Pogo. He isn't too excited by the thought of eight sea-based towers and considers it his personal mission to climb 'em and blow 'em up! Essentially, this is a platformer with some interesting pseudo-3D mechanics which provide a pretty unique visual style within an ingenious design. This is class programming.

The world certainly revolves around little Pogo. During gameplay, he always remains at the centre of the screen with horizontal movements causing the screen to scroll in a "three-dimensional" circular motion, thus turning the tower around. All are cylindrical in shape with several platforms dotted all around the outside and nifty tunnels which offer a great way quickly access the opposite side whenever your current pathway is a dead end. However, getting to the top won't be easy! There is a barrage of unusual nasties to either shoot or avoid with one that flys by to conveniently get in your way. Access to the top will involve careful strategy because your route is broken thus forcing you to use opposite sides of the tower depending on where you are. So always consider the option of using these tunnels to quickly nip through to the other side... they might also come in handy to avoid those flying obstacles!! 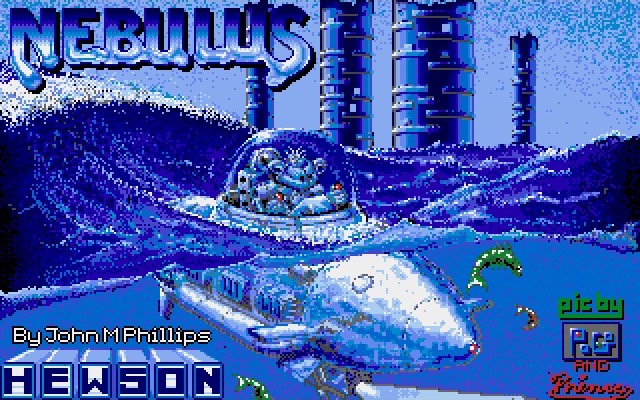 A belting title screen before being chauffeured to the game by a rather spiffy water ship.

Nebulus may sound easy but it's actually very challenging and a brisk time limit allows little room for error. Bumping into an enemy will drop you down to the previous ledge, which is fantastic because that doesn't necessarily mean a frustrating loss of life, nor will it impede your momentum as you pick yourself up to try that part of the tower all over again. However, if there isn't a ledge to land on, then you might fall even further down thus requiring lots of hefty backtracking, which could prove too much if little time remains. Ohh the pressure!!

Falling further still (and into the water) is strangely fatal for this little froggy who is the only frog ever to have existed that can't handle it - so he loses a life! Also interesting is a bonus game featured in-between the levels - this has Pogo travelling to his next tower via a nice horizontal scroller. It's a shooter featuring lots of Psygnosis-busting smooth parallax scrolling and is quite humble so should have been longer because I really enjoyed it a bunch. 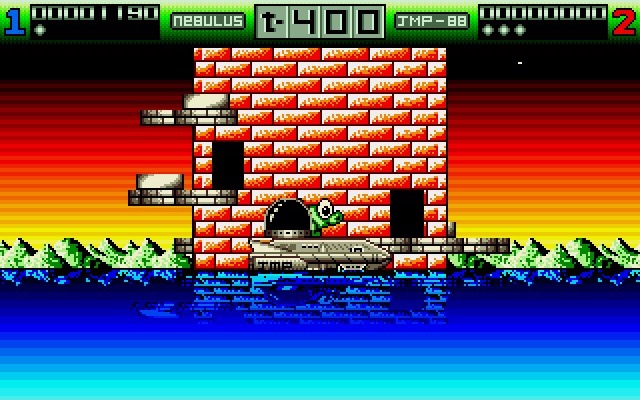 Talk about going the extra mile and NOT sticking to 16-colours! Absolutely superb.

Throughout our adventure, the visuals are utterly tremendous. Nebulus is programmed by legend, John M Phillips, who treats us to a colourful display of great artwork and smooth framerates. It's amazing just what the ST could crank out - when programmed by somebody with talent and commitment. All audio is equally impressive with gorgeous sound effects, some of the best samples, and a beautifully unique chiptune I can leave running all day!

Nebulus can feel a little finicky at first, with a learning curve that is much steeper than you would expect but, with lots of practice, I guarantee many hours of addictive gaming because this is a real firecracker!! I love how it perfectly integrates both arcade action and strategical thinking using a fascinating visual style which is far ahead of its time. Nebulus is JMP magic and an icon of the awesome 16-bit era. Hard but a truly wonderful shoot 'em up!

Okay, ignore my jerky capture because this part scrolls superbly and is great fun!!


Floppies are available on Stonish and 8BitChip has a hard drive game!

Email ThisBlogThis!Share to TwitterShare to FacebookShare to Pinterest
Labels: 1988, Platformers