Mud Pies is one of the oldest Atari ST games there is and stars Arnold, a kid who thought he would love the circus. However, it came to his town and he absolutely hated it - so he threw a pie at one of the clowns. Unfortunately, these clowns aren't known for having a good sense of humour so chased after him. There's only one thing left to do... No, we aren't running off home to tell our Mum, we're gonna throw even more pies!!

Each screen represents a tent from the circus and has an invading army of clowns - who look more like jelly monsters dressed up as Ronald McDonald! They're insane and wander waving their arms and chucking juggling pins. This invasion will last forever but the pies won't so look for an open door to another tent full of mud pies - and more clowns. Throwing a mud pie will see them flying off the screen and multiple hits scores extra points. Try not to get yourself trapped in a corner otherwise, you might receive a juggling pin knockout blow! 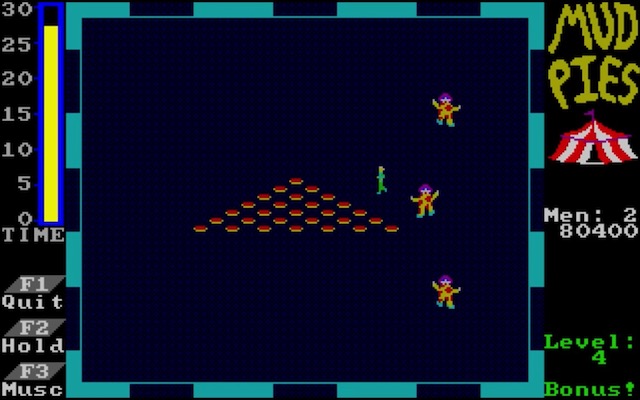 Challenge rooms are a little different to the standard tents because they have no mud pies but lots of clowns to avoid whilst you try to grab a prize - for 1000 points. Also, every 20,000 points, a secret door will magically appear for the chance to enter into a Mudslinging Round where you have 30 seconds to throw pies at wandering clowns!!

Don't clown about too much and get hit. If you do, two medics appear with a stretcher and carry you off to the first aid tent. Only three times can this happen before it's game over, but a freebie is awarded for every 10,000 points. A health meter is displayed top/left of the screen and is split into three segments with the middle one enabling you to run very fast. However, this speed is reduced if you become too hungry or if you've over-faced on burgers and fries. So try to keep your health a nice happy medium throughout for maximum agility. 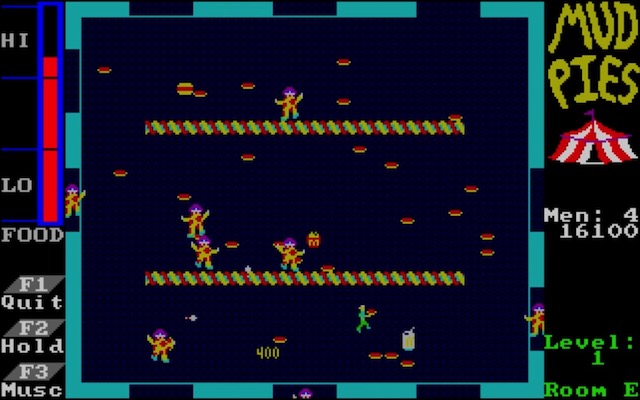 Always frantic, always fun and so addictive. This game is eternal!!

Graphically, this isn't exactly stressing our Atari ST in the slightest. But remember that is was developed and released back in 1985 before programmers knew how to push this new computer. Having said that, it's got a certain Charley Chuck charm to it and, being a gamer since the early 1980s, I kinda love this retro look. Spot sound effects are okay but it is best to leave the music on. Again, this isn't anything near the quality we would expect but it's surprisingly enjoyable. I swear, I love how this game sounds and looks.

Mudpies is terribly good fun and a great take on the Food Fight theme with gameplay that transports you all the way back to your youth. There isn't a lot to this simple arcader but I've had so much fun slinging mud pies at clowns - this is so entertaining. Grab a piece of this old skool action for either floppy or hard drive. Enjoy!! 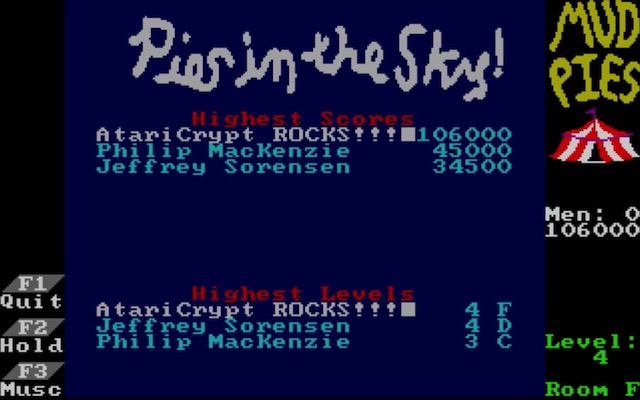 Email ThisBlogThis!Share to TwitterShare to FacebookShare to Pinterest
Labels: 1985, Action