Zool was released in 1993 by one of the most acclaimed gaming companies, Gremlin Graphics who have gone that extra mile to support both models of Atari ST computer. At first, this appears to be a Sonic clone and does indeed have many similarities but, Sonic it ain't. This disappointed many back in the day (like me) but I figured enough time had passed and I really should give this zippy insect another second chance...

Our little protagonist is a rather odd critter. A badly-disguised ninja ant (well, I think it is!) who is from the "Nth Dimension". He can run, climb, leap and even perform a silly airborne pirouette. His mission is to travel six worlds and prove himself worthy of earning the black belt accolade he so richly desires. Each world is split into three segments of progressive difficulty and, of course, are littered with traps and countless baddies to contend with.

The first is "Sweet World" which could be a child's favourite dream: an entire planet made of candy. But these sweets are killer sweets: like wobbly jelly and a cute rapidly-firing dolly mixture! The second is musically themed and features angry instruments like bongo drums and even some nice ones that play helpful musical notes. However, this is about as far as I've managed to get so I'm extremely grateful for a handy cheat mode which allows me to play on the later levels (and I must admit to being laughably impressed by the Meccano-styles in Tool World) 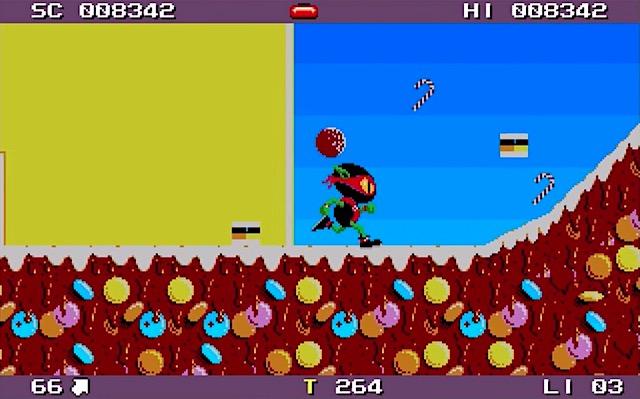 The first level is great and has a little iddy biddy Sonic vibe to it... 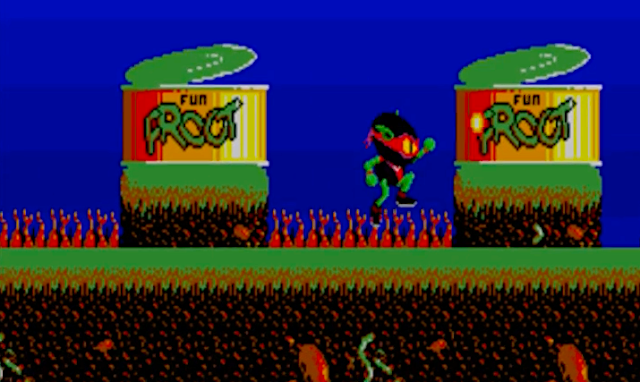 Watch where you're walking! So many dangerous places in this world of weird.

Collecting the items is the name of the game and, in Sweet World, that means candy. Look at the bottom/left of your screen which displays how many are required with an arrow pointing you in the right direction to find more. Thankfully, there are restart points from which to continue your adventure but it will never be easy as each level has such a cruel layout littered full of traps - and a huge number of baddies. Beware, lots of practice is required!!

Controls are absolutely superb - intuitive and very responsive - with an option to use inertia, which I personally leave disabled. Keep banging on that fire button for rapid firepower and if you tap it again (during a jump) then a pirouette manoeuvre is actioned to kill even more. Power-ups are also frequently available to ease your hectic adventure like Two Zool - your very own doppelganger. Like all ninjas, Zool has an energy shield which can be replenished during play but it can survive only three hits before you're as dead as a dodo.

Visually, Zool rocks and I'm sure they've used every colour they could for a weirdly gaudy display with beautiful sprites - I love the purple dolly mixture. Atari STe users will be thrilled to witness more colours and their screen scrolling along at an alarming 50fps. However, there is a slowdown in places which is a shame. Audio is superb with sound effects and optional chiptunes. It would have been nice to hear DMA effects, especially noticeable in world two - with its oddly silent musical instruments. A missed opportunity, I thought. 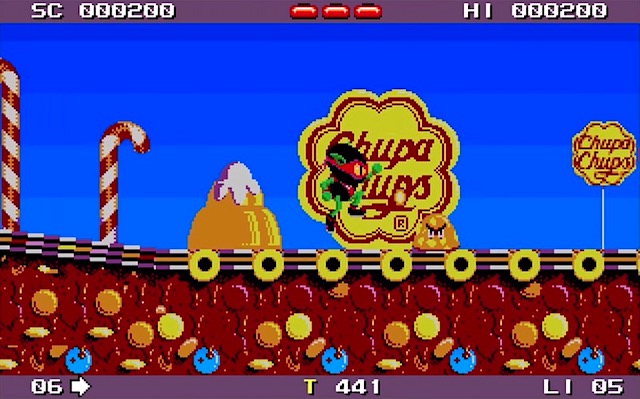 Right, hands up who wants a lollipop now? What... Just me? Darn it!! 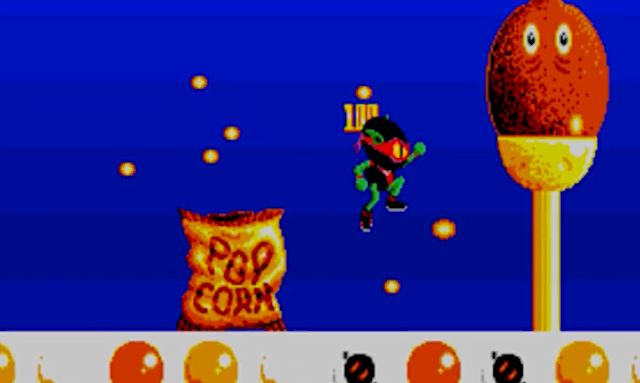 This ninja is nimble and makes use of the Atari STe hardware. Why couldn't more have done this?

Zool is great but far from perfect mostly thanks to frustrating mechanics that can ultimately spoil what would have been a cracking game. For example, don't expect to whizz great distances like that spiky hedgehog because Zool's levels are oddly designed to contradict his spritely Ninja abilities. There are far too many deadly objects, many off-screen, and the enemies are constantly respawning which is annoying... Arghh, less is more!!

However, ignoring the negatives, I admit to enjoying Zool. It's fast, crazy and it is stuffed with an insane personality. This is a great platformer - especially when played using the Atari STe. Now, gimme some Chupa Chups!!

- 8BitChip always has the best download for those with a hard drive/Ultrasatan.
- For those stuck with floppy disks, then Old Games Finder will ease your pain!
- AtariMania not only feature Zool in their ST database website but also have the manual and code wheel!
- To cheat simply type in PANDA on the main menu and you will see a flicker. During a game press:
-> Spacebar 1 - will make you invincible.
-> Spacebar 2 - to skip forward onto the next stage.
-> Spacebar 3 - to skip forward onto the next world.