Alien Thing was released late in the ST's life by 999 Software for Top Byte and if you've ever played Alien Syndrome, Gauntlet or Storm then you'll know exactly what to expect from this overhead shoot 'em up set in space. It's the same old story: heading for Earth is a distant spaceship filled to the brim with a vicious alien hoard who are hungry for our blood. It's time to tool-up, sneak on board, and begin mercilessly killing anything that looks like it bites.

Their spaceship is split into 11 levels with each requiring a mission to be completed. The first starts off simple (kill everything!!) with later missions being far more complex and if you happen to fail then you are immediately sent straight back to the beginning. This ship is huge, yet with a clear definition in design, so you won't lose your bearings.

Almost every corridor has some kind of doorway which can be opened, one way or another. Key cards are a good idea and these can usually be found hidden inside the blue cabinets - along with other bonuses like a 1UP and ammo. However, use these cards wisely because not every door needs to be immediately opened... 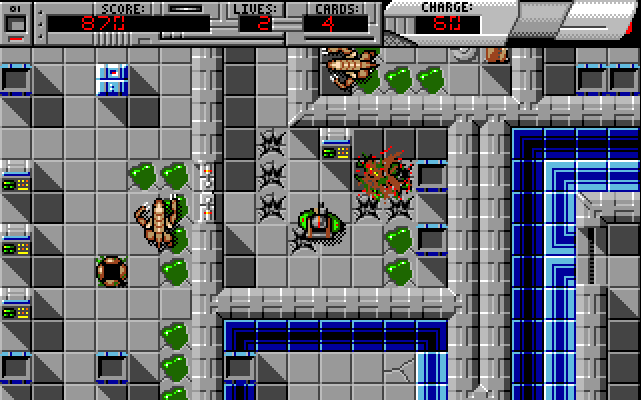 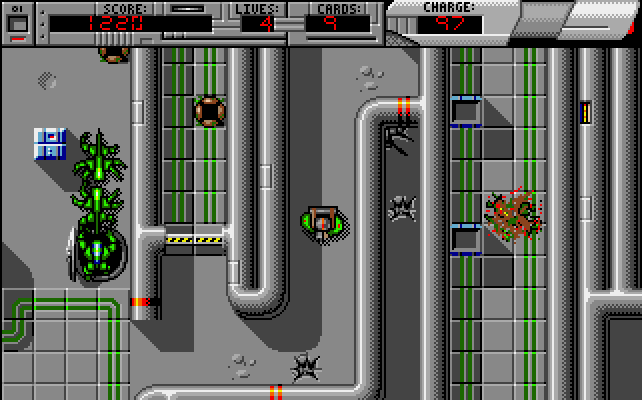 See those holes and the pools of slime? Annoying aren't they? lol

Joystick controls are excellent and responsive so it's easy navigating this ship, even if I oddly move quicker than the aliens! These beasts are everywhere - so stay frosty - because they can withstand several hits before turning into a splattered mess. Their eggs must be quickly blown-up before a new alien is born and pops-out to eat you!

Some leave behind pools of poisonous slime and this need to be destroyed before you are able to pass. Each of your weapons has a varying level of effectiveness and the flamethrower is awesome so try searching the orange cabinets for yours. However, I'm not fresh on the laser which needs a recharge far too frequently for my liking. 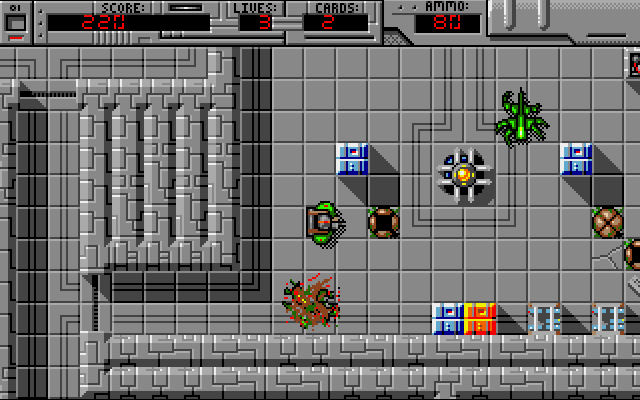 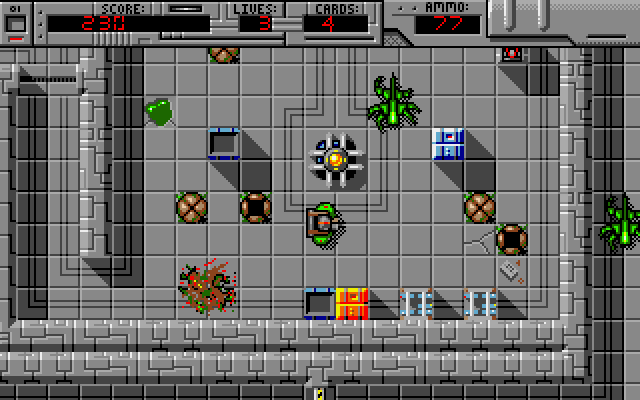 Alien Thing (above) and the updated Expert Edition (lower)
This is a simple example of the differences, ie: map changes, items, pools of gunk, etc.

The graphics are nicely drawn and I like the contrast of vivid colours against the spaceship's metallic build. The near-luminous green aliens really do stand out which works so well, even if they do move like squashed spiders! Sadly, the scrolling should be smoother so it's disappointing the ST'e hardware wasn't used to full effect.

Sound effects might be crude but that doesn't mean they're superb. Actually, they're genuinely entertaining and I love it when an alien dies - almost as much as our own pitiful death cry. On an STFM the quality is good but quite fuzzy whereas they've made use of the DMA inside the STe for greater clarity. Which works beautifully. 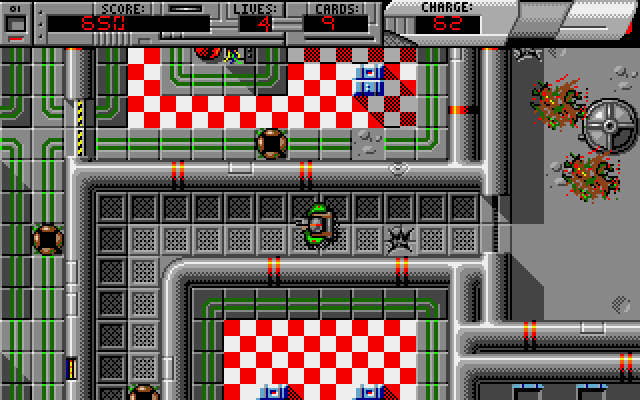 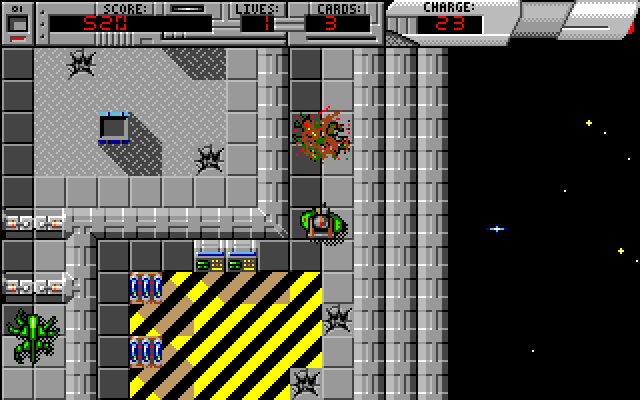 Tooled up and patrolling the corridors... Surely, this is a gamer's perfect dream?

Nothing is perfect and Alien Thing provided me with a few things to whine about - like when a corridor is blocked by a pool of slime that's impossible to destroy that because it's too close to a wall. Also, one-touch of the slime means instant death! Plus it's silly having one sound effect when a shot hits the wall, regardless of the weapon!

My moaning aside, Alien Thing is a nice take on the Aliens scenario with a nifty balance of arcade-style action, exploration, and strategical thinking which is all thanks to a good design and challenging missions. I love this game so stop your grinnin' and drop your linen because this is a seriously addictive shoot 'em up!!

Downloads are available all over the internet but I've bundled together all "three" Alien Thing games to download off my Dropbox. For those struggling, there is a genius password system (just press the "/?" key on the menu) and here are the codes: PARTY,  WORK,  LARD,  WHEEE,  HELLO,  HARD,  GOSH,  NIGHT,  PEN,  RULER

Email ThisBlogThis!Share to TwitterShare to FacebookShare to Pinterest
Labels: 1995, Action