I'd seen pictures of this underwater shoot 'em up but didn't really know what to expect from what seemed a pretty naff James Bond wannabe. Released in 1991 by Domark, our villain is the busty Madame Q who desires nothing less than to rule the world. She's gone and kidnapped lots of gorgeous girls who are to be experimented on and turned into monsters. Okay, so our task is to find her secret base, kill all the baddies, and free the hostages.

Grab something rubbery to wear because her base is deep underwater which reminds me of Scuba Dive on my old ZX Spectrum! But these dangerous waters are patrolled by armed guards and robotic sharks. Harpoon everything that moves and destroy the automated defences before blowing open an entrance to her lair. 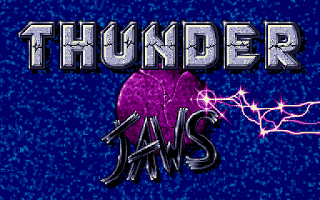 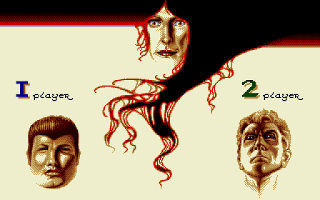 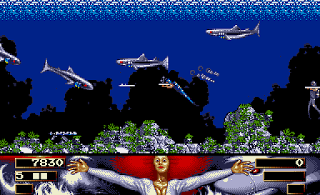 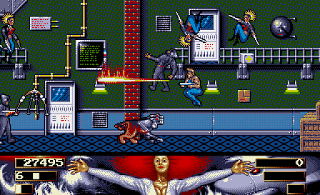 Once inside, the game changes to a scrolling platformer which is basically a ripoff of Rolling Thunder (yikes, we all remember that dreadful conversion). Anyhow, this stage is better and with henchmen and other strange characters chasing you. Weaponry remains the same and can also be upgraded to a flamethrower, uzi, rockets, and more. Finally, battle a boss and rescue yourself a few gorgeous babes - who will be extremely grateful.

Once completed, it flips back to the underwater stage and we repeat for similar missions. The difficulty level increases as we infiltrate through the base but it's now that I needed to activate a trainer because the later levels are crammed with an insane amount of baddies!! Also, the end of level bosses are tough and made worse by tons of other bad guys turning up to help out their boss. Argh, my screen is littered with too many brawling sprites!! 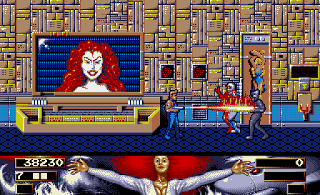 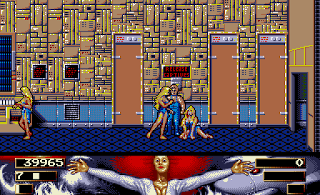 Yikes, our evil villain looks freaky but rescuing the sexy girls produces kisses and hugs for our hero!! 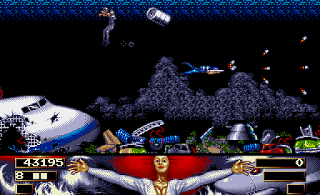 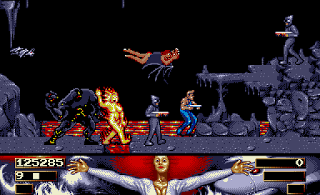 Later on, we're in dirty waters which leads to scary rock monsters and naked firewomen!

Visuals are nice with neat sprites but nothing beats watching the girls falling to their feet for lots of comical kissing. Sadly, there isn't a chiptune bopping away in the background but the sound effects are quite good. Actually, no, they are crude at best. The grunts are deranged but I liked the haunting female's scream of death.

I must admit, I'm a little unsure what to make of Thunder Jaws. It's predictable but fun and the addition of two-player co-op is excellent. However, the later levels are impossible without cheating and I got a whiff of a lame port when things slowed to a sluggish pace. Having said that, it's not the disaster Rolling Thunder was and I enjoyed pretending to be James Bond, rescuing sexy girls and saving the world from a busty tyrant... Oh yeah!! 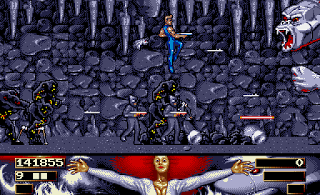 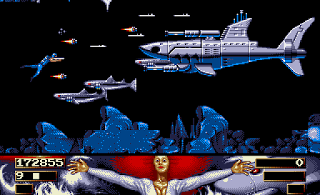 The end boss battles are rubbish which is basically because there are too many enemies... 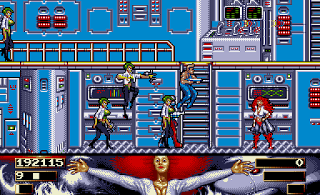 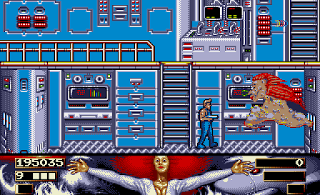 Finally, we get to meet the flame-haired temptress but then she morphs into something ugly!!

Thunder Jaws can be download for floppy or hard disk but only if you look good in flippers! Please note, faster computers will benefit smoother framerates but only when installing onto a hard drive - thanks to 8BitChip.

Yep, I really enjoyed playing Thunder Jaws. It's not perfect but I played through to the end. Good game!!

Here is the end screen... it's probably best I don't comment? :) 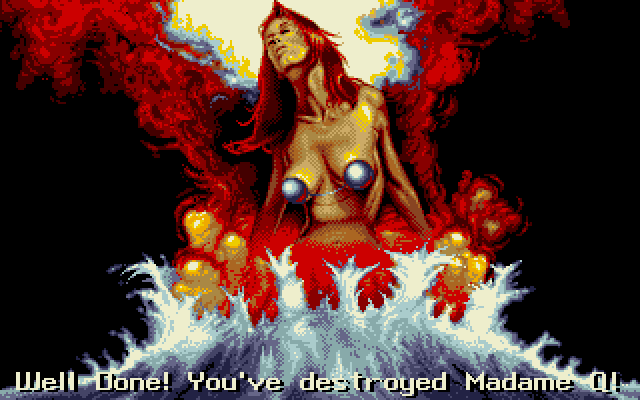