Astonished by the ST scene!
Stonish are having a fantastic year with a ton of additions to their database. I downloaded a few of these crackers and ended up loving the goods of Supremacy #7: James Pond, a Steve Bak classic. Action Fighter, hey this is pretty good. The Mystic Well, one for geeks! But it was Stunt Car Racer that had me hooked so, here we are!

I remembered friends telling me about a 3D racer by Geoff Crammond which was like Evel Knievel meets (a playable version of) Hard Drivin'. However, I simply couldn't control my buggy for love nor money so failed to see what the attraction was and placed it in the same category as Powerdrome - nice but impossible to control... 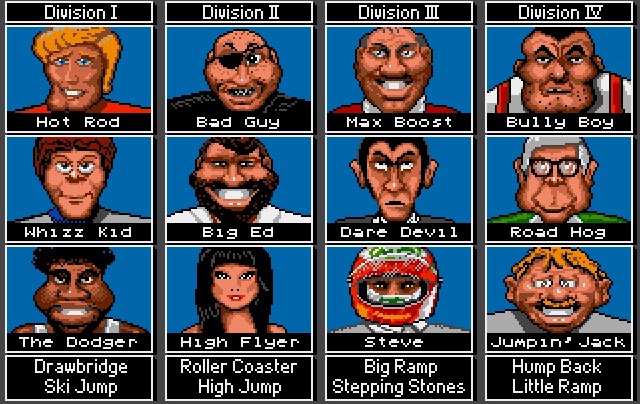 Genius track design with incredibly cunning tricks and a motley crew to race against! 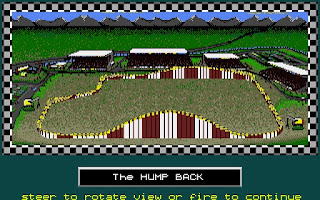 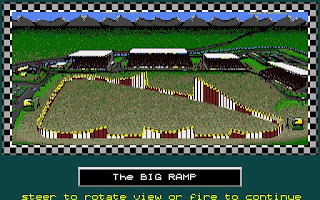 Well, thanks to Stonish and this floppy disk, I booted up Stunt Car Racer and attempted a couple of practice laps like it was 1989 again. To my genuine surprise, I didn't crash or fall off the track!!! So I played another game and even took part in a league challenge - which I won. Now I was gleaming with pride because this wasn't like me at all. Yup, this success went straight to my head and I started to get very excited - not easy at my age!

So I dared myself on and practised several different tracks, with a varying degree of success. Well, I'm being kind to myself here: The Stepping Stones is a killer which I think everybody should foolishly attempt, Kamikaze style!! The Draw Bridge looks easy but has a nifty trick up its sleeve... and The Big Ramp features a ginormous monster gap which can only be jumped by going over 200mph. There might only be 8 tracks but they are all beauties! 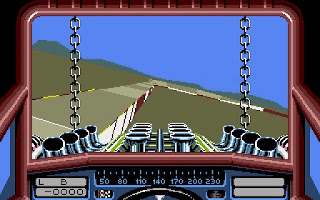 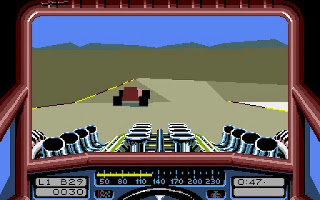 I love the way you are dropped in! Now the fun begins and against a blocky opponent. 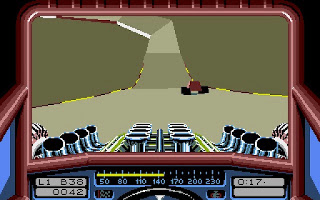 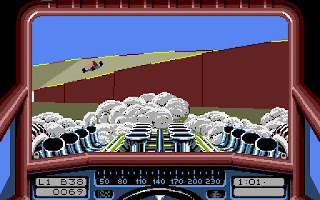 I thought I was catching him up but I skidded off into the dirt - only to watch him zoom off...

Weeeeee!! This is fun fun fun!!
Stunt Car Racer is controlled using the joystick: pushing up accelerates whilst fire enables turbo boost for added speed. Pulling down breaks and can reverse, which comes in handy after falling off the tracks. Turning left or right isn't overly sensitive but precise and feels just right. Natural and very comfortable from the very start. Thus instantly playable and mastering the buggy's controls isn't tedious at all but rather very rewarding.

Practice mode is great for learning the ropes and mastering those difficult parts of most tracks but I found myself jumping straight into the league to compete against a computer-controlled opponent. They are well-balanced - so the computer ain't no slouch nor is it Jimmie Johnson. Also, you have the option to compete against friends and even hook-up your ST to another glorious Atari computer. Oh, or maybe an Amiga, if you so desire! ;)

You win some, you lose some... Stick with it and you'll be their hero - with a giant egg cup!

Let the good times roll
Graphically, this racer lacks the flair and pizzazz of Lotus 2 or Crazy Cars 3 but this is actually a good thing because the framerate doesn't suffer from any unnecessary aesthetics. Sadly, sounds aren't exactly the best I've heard from my ST: there are numerous effects but that engine noise could have been better (I found myself turning the volume down a bit). In fact, I'd love to see this game improved with STe DMA effects [hint PP!!]

Stunt Car Racer is fast and furious with wonky tracks which are a thrill to compete on. Whether you choose to master those tricky stunts in Practice mode or jump straight into a league battle, I guarantee hours of fun. The physics are spot-on perfect and the stunt aspect is so addictive, unlike Hard Drivin! Dear Mr Crammond, you did it again and delivered a racer which is exciting, addictive and a bucket load of fun!! Overall, 10/10. Absolutely.


I suggest you bob over to Stonish to download lots of ST goodies!!

Those with anything newer than an Atari Falcon...
might be interested in Drifted.com and Madalin Stunt Cars 2
Sigh... I need to upgrade my Mac because that looks amazing!!

Email ThisBlogThis!Share to TwitterShare to FacebookShare to Pinterest
Labels: 1989, Racers