I recently met Andrew Gisby, the creator of a distinctive shoot 'em up for the Atari STe (and Falcon) that takes place in the darkness of space. It's called Zero 5 released in 1994 by Caspian Software and is a rare gem so it wasn't long before I came up with the notion for an interview! (which you can read if you scroll down)

Set in the year 2044 with a silly fictional storyline of aliens who are about to invade Earth. Unsurprisingly, we are the only hope to save mankind so jump inside your spaceship and head out into the heavens because humanity is depending on you. I'm getting sick of saving the day but I head out being the hero that I am... 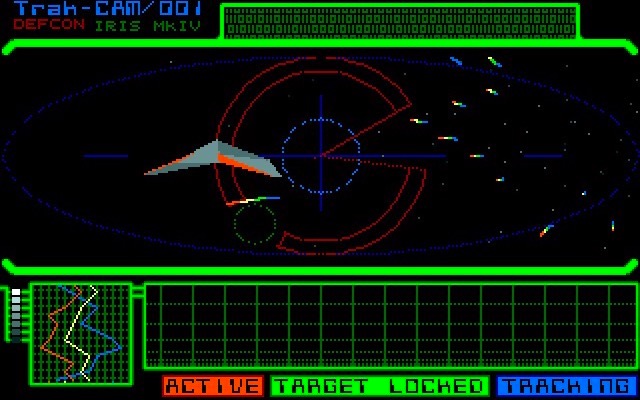 Come on, that warping effect is so stunning. Love it!!

Set amongst the countless stars, with some missions taking place upon the surface of remote planets, Zero 5 is a first-person 3D shoot 'em up which feels like an artful mix of Star Wars and elements of Frontier. Our spaceship is a cool slab of old skool 3D called Perseus which must be piloted through several missions which might involve attacking an alien strike force, defending allied ships, and lots more exciting stuff.

Control is with the mouse, or a JapPad if you have one, and is precise, responsive and feels very natural. The natural feel of momentum provides a necessary learning curve but you'll soon get the hang of it very quickly. What's probably the hardest to learn is the game's GUI and the instruments which provide a wealth of information. 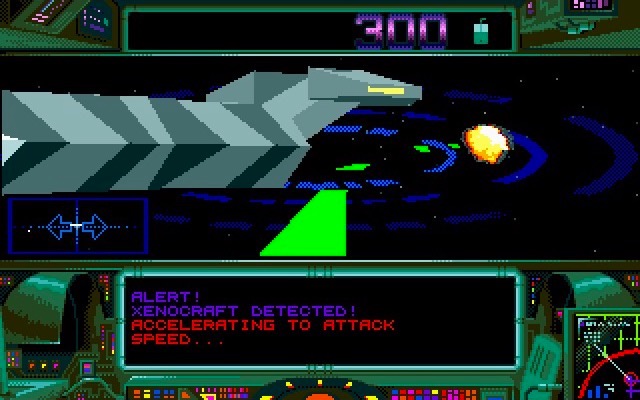 This game has some impressive 3D polygons which will take advantage of faster computers.

Graphically, Zero 5 is a gorgeous 16-bit bombshell. The number of on-screen colours has been increased whilst also making use of the Blitter co-processor that helps produce those cool 3D visuals. Faster computers are supported, so anyone lucky enough to own a Falcon is going to enjoy smoother frame rates.

Audio is outstanding, for both music and effects, all which use the DMA hardware ticking over at a sweet 25KHz. The effects during warp and other scenes are just stunning. This is one of those games I wish would have come on CD as I wonder how limited Andrew was by floppy disks. Folks, this is one sexy-sounding Atari STe game! 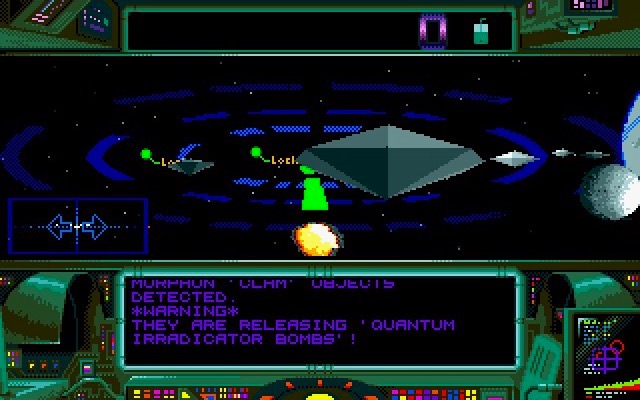 Oh no, incoming enemies are identified and locked. Only one thing left to do - kill 'em!!!

I've always enjoyed playing this space shooter because it's fast and thrilling with such a varied and a wide range of interesting missions. Its style and presentation using cool menus are unique and I enjoy the range of missions which is the best part of all. Love the graphics and the booming sound effects are fantastic. Overall, a slick shoot 'em up that incorporates many astonishing technical achievements to put most game developers to shame.

Zero 5 is scattered all over the internet but I think Stonish has the best floppies thanks to Supremacy disks #61 and #62. Of course, installing to hard drive/Ultrasatan is better and 8BitChip has that funky download.

Zero 5 has a wonderful next-gen feel yet is often unknown to many people returning to the scene. Tell us about your game and what it means to you.


I had been trying to get published in one way shape or form for several years. Back in the day, I lived the life of the Indie / hobby / night owl developer. Holding down a job during the waking hours and coming home to hack away on my much loved (at the time) Atari’s. I remember buying my first Atari 512STFm in the late 80’s. I spent many hours teaching myself to program in 68000 Assembler. Bulletin boards, books, magazines & chance discussions at shows to pick up game dev knowledge. I’m no mathematician, but a series of articles in (I think) ST World on transformations and 3D math gave me so much. I could finally make the leap into 3D games. Everything had to be done in assembler to keep up the speed and finally reading something that explained techniques to turn formulas into simplified assembler was a revelation. To this day, I still keep a pocket “Signetics S68000 User’s Guide” - It was my Bible for machine code programming. An awful lot was learnt the hard way through trial and error (no instant online answers). I used to look at the latest effects in games (and film) and try to do something similar. So I think Zero-5 marked a highpoint for me. The peak of understanding of what I could personally do with (by then) the STe to make a game. I had built up a large library of routines & techniques to achieve some of the visual and audio effects.
So, in summary, Zero-5 was the realisation of a couple of dreams:

Was Zero 5 inspired by anything else from your gaming history?


Everything I had developed was an inspiration for the game. A cheap answer, but my whole gaming exploits (to this day) are a sequence of inspirations. However, if I was to list a few things that inspired the game.

Sci-fi films and TV programs had a lot of influence. I’m a bit of a science fiction addict. But to list a few that helped inspire ideas in the game:

What was your background prior to working for Caspian?
See above ... Self taught hobby game dev trying to get published!

Most commercial companies had left the Atari ST by 1994 so what inspired you to carry on during those dark days?


At the time, I thought the Atari Falcon030 and Jaguar was going to save the day. I only knew how to make games on the Atari’s and thought that if Zero-5 was a success, I’d move on to these platforms properly. The Falcon030 enhancements in Zero-5 were done in the last few months. I didn’t really do it justice (but the extra CPU speed helped push the content level up a bit more).
Zero-5 really was a labour of love and I was under my first proper gamedev contract - Inspiration enough right !?!

Did Zero 5 live up to your expectations?


Technical Stretch: Yes (I used every chip/trick I knew in the STE!)
Creative Achievement: Yes
Critical Acclaim: Yes (at the time)
Commercial Success: No
I put so much effort and creativity into the game. The landfall sequences were a personal triumph. Turning a bitmap (height map) into a 3D landscape on an STe ... yes!) - One of those 3D simulation dreams realised.
The lack of commercial success was tough to take - We had lot of trouble with piracy (it was rife by then). I spoke to a lot of people that had played the game and loved it. As you say though, the sun was setting on Atari home computers - a shame for me at the time. Thinking back, I think the sheer effort involved did burn me out a bit.

Looking back, would you do anything different?

What happened after Zero 5 and how come you didn't continue on after Caspian's demise? (freelance, etc)


Newly married, we started a family soon after Zero-5. I couldn’t commit to working on the Jaguar version of the game (my daytime job in IT paid the bills). Creatively, the console wasn’t a copy of the original other than souped-up manic fighting sequences (arguably something I was trying to do when I first started developing the STe version). I was involved on a consultation basis but the Jag was new and it was a steep learning curve for the guys at Caspian. It was pretty exciting to be working with Atari though.

How long did it take you to code this game, what tools did you use, and was it on an actual Atari?


1 - 2 years to develop. I pulled in a lot of previously developed libraries and routines. Interesting memory about this. I used one of the first routines I’d ever dev’ed in assembler to simulate a 3d starfield. Development of the game went to the wire. I had this intermittent bug where the machine was (every so often) crashing! What felt like a few hours (day or so I think) before the game went to press, I found the cause ... That starfield routine (Randomly, I was managing to plot the odd star just outside memory reserved for the screen - d’oh!).
I used a 1Mb STe and laterly Falcon030 to develop the game. I got an HDD sometime through the project that saved doing the floppy / ram disk shuffle (speeded up game dev no end).
I recall using the blitter chip and new audio chip enhancements to great effect. Certainly without them, there was no way I could have thrown so many things around on screen and in your ears. Although it makes me chuckle at what we thought was a reasonable frame rate back then! Recalling the game audio engine I developed as part of Zero-5 - It give me multiple stereo Left / Right channels and a scripted approach to sound effect generation. The upshot was I could chain, stretch, compress and generally mess around with samples without eating too much precious CPU. 8bit samples of course, so sound pretty harsh nowadays.
Main tools I used:

Were you active in the ST scene elsewhere or was it just Caspian / Zero 5?


No, not really, I had a brief flirtation with demoscene but game dev was always my interest.

After our chats on Twitter, I'm aware you now see an Atari ST scene which is still very much alive and kicking. What do you think about this and will rejoin in some capacity or have you left forever?
Never say never. Honestly though - I’m well into Unity 3D and what spare time I have goes into that.

Do you still own an Atari computer? What is it and how often are you using it / what for?


I still have an Atari STe and Falcon030 tucked away alongside a massive trunk of floppy disks (Oh and a back catalogue of ST World). I haven’t really used them since the 90’s. I had a gamedev break late 90s till the 00’s really.

Tell us about your future plans and what you're working on today?


I’d like to bring something made with Unity to the masses. My current project is a game called “Konjitto”. With my family more or less grown up, I’m now steadily been drawn back to game dev more and more. A dream would be to give up the day job and spend my days writing games! I get a kick out of doing the coding, graphics, sound and music (although this is my weakest area).
Anyone can keep an eye on my game dev twitter feed or youtube channel to see what is on the boil.
https://twitter.com/duckocide
https://www.youtube.com/user/duckocide
Thanks for getting in touch, it has been fun reminiscing. Seeing people still appreciate those efforts back in the day is wonderful. Certainly made me and the family smile! Keep up the good work on the site.
Answering the questions has been pleasure!
Thanks
Andy