I'm sure everyone knows that Jet Pac was originally released in 1983 for the ZX Spectrum by uber gaming legends, Ultimate Play The Game. Its one of the most iconic 8Bit games from that era and our conversion was developed by Pete J. Whitby in 1992 for Budgie UK. Heck, he also made all the graphics and sound effects.

Jet Man is a lucky fella working as a space pilot for Acme Interstellar Transport Company. They're sending him to fifty planets to assemble (and playtest) their technological creations. Sadly, his luck ran out when he discovered each planet is being bombarded by a variety of hostiles ranging from fiery comets to fluffy aliens. 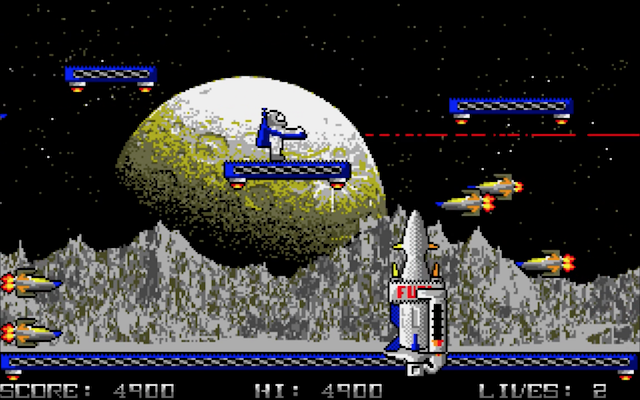 There are so many different baddies to blast and not all are like they first appear.

Playability is impressive with tight controls which feel a tad quicker than on the Speccy but Jet Man's movements are exactly as you would expect. Oddly, he cannot wrap around the screen which is disappointing but he compensates this lost ability with shield power-ups that work surprisingly well. The range of nasties is wide and with differing attack patterns that help to keep gameplay interesting. Many are new and some will require several shots whereas others are invulnerable. Also, watch out for deadly platforms that can zap Jet Man into an early grave. There is even an end, something missing from the original, if only I had better gaming skills to witness it for myself...

Graphics are much the same as in the Speccy classic but with extra colours and lots of smooth-moving sprites. However, I'm not too keen on the background picture, which I feel isn't necessary. The sound effects are lame and it's shocking to hear the ST out-performed by the Spectrum's inferior bleeper. Yikes, this is embarrassing!! 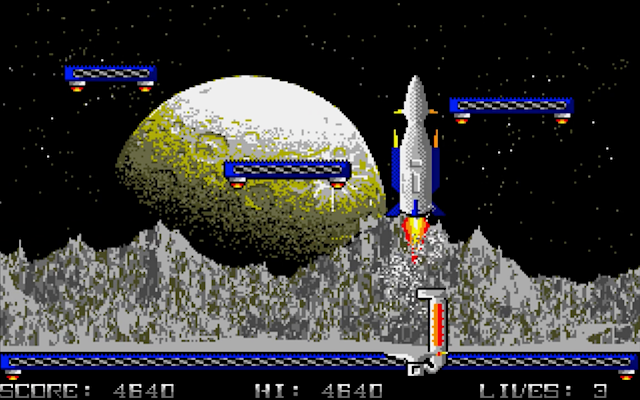 Jet Man is one lucky dude who gets to play with all the cool new rockets!

Jetpac is Jetpac and it will always be superb. Okay, this remake was never going to beat the original but I feel Pete has successfully captured an authentic feel and even implement some new ideas. What's not to love about frantically zapping a relentless alien hoard when collecting fuel pods? Audio aside, this is an excellent conversion.

- Jetpac is available on both floppy disk and can even be installed on to your hard drive.
- Play the original ZX Spectrum game on your Atari ST using an emulator:
> Artemis is a great b/w emulator which only works on 8MHz Atari ST/e computers.
> Speccy is another emulator w/ support for colours and faster Atari computers too.

Email ThisBlogThis!Share to TwitterShare to FacebookShare to Pinterest
Labels: 1992, PD