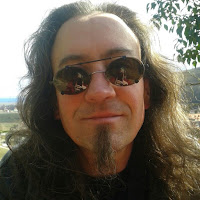 I thought it was about time we featured another interview here on AtariCrypt and who better than my mate Sebastien Larnac! He's better known as ST Survivor, a name you might have seen credited in many wonderful Atari ST demos. Also, he's created screens for other programs, such as gwEm's STj and MaxYMiser.

Compared to most of us, he became an ST nutter quite late in the day. But it wasn't long before he was testing the waters of the demoscene with his doodles and later writing for disk magazines. He appears modest but it's quite an impressive hiSTory!

So I had this bright idea to interview the dude behind those funky glasses and see what makes him tick. Some details I found quite surprising but overall this is an extremely talented young gent, even if he is French! :^) Seriously folks, take a gander at Demozoo to see his superb art. I hope you enjoy this interview...

I received my Atari STe as a Christmas gift back in 1990 and spent a couple of years copying hacked games… until one day one of my floppies was filled with something called a “demo”. What the heck was that? I instantly loved the idea behind it and got in touch with the creators (I actually phoned one of them!). I already doodled on paper, why not on a computer? So I joined NLC at a time when some people were leaving the demoscene (damn me, for being too late!). I worked on a GFA megademo (Back In France) with my friend Thyrex, who ran the French diskmag ToXic.

I had the opportunity to make more pictures for various demo crews and took the position of the main editor of UnderCover Magascene. I also founded aLiVe! with CiH/Maggie Team and that’s it. I left the Atari Scene around 2003 because I was pi**ed off with life and finally got back to my second family somewhere around 2013.

It may sound silly but definitely, my best memory and true pride remains for our GFA megademo with Thyrex/NLC. It was started in 1994 as a multi-crew project, then, of course, everyone left and the two of us remained, wondering what we would do. Oddly it did not kill our motivation! Sure it took us another four years, the final result far from perfect, yet it is a demo made with a lot of passion and friendship.

Moving onto more recent artwork, I am very proud of the work we did on POOZ along with Cooper, Exocet and DmaSc. I personally think the game looks and plays like a true commercial game!

I am not inspired, graphics wise, by anyone but me and this must be the reason why I know/feel that most people don’t like my art. Well, sorry folks, art is a matter of taste :) I truly admire people like Evil/DHS who have brought us so many great demos. I don’t admire, but have a lot of respect for the friends I have worked with because -most of the time- it was a great opportunity to share ideas and artistic passion. I am still impressed by people like Niko, Mic, Prowler or Slayer, you know the kind of dark-inspired graphics ;)

For a very long time, I have been a fan of Niko with his tortured and highly detailed style. Now I see that most of his pictures were mostly copies of existing paintings, not that it takes away any of his pixel art qualities. Yet today I would rather admire people like Mic/Dune and Exocet who not only have a very specific style but can also work either with very limited palettes or with wider ones. Exocet is also very well known for painting on a lot of platforms, thumbs up! They are true artists who manage to bring art whatever the challenge they need to face.

I've had my STe since Christmas 1990 so I have never been either fond of nor familiar with what the early years produced. Sorry guys, but I’m not in love with rough demos from the 1980s. In the nineties, demos started showing technique AND style and I have some favourites from this era, as well as some others from more recent years.

If I had to choose only one it would be… Wait, only one you say? Tough choice but I think I would go for Froggies Over The Fence. Not because of some national pride but because it’s a huge megademo showing many different styles - “classic” demo parts, an animated story, a Tetris-like game featuring the Jess tunes (I’m a huge fan!), an awesome high colour slideshow and a very long end scroller. Of course, there are tons of other demos I also love.

To me, a good group is formed by a bunch of friends who enjoy working together. Dead Hackers Society prove this with their many impressive demos and I am always amazed to see new effects from them, things we thought could not be done. Yet it is not my favourite demo crew, I don’t think I have one, to be honest. I like the guys of Cream though, they seem to embody the true essence of a crew: each individual does something important, none is ahead, it’s a thing that could not be done without every member. It may sound silly, but this is how I feel this group works (and their latest demo Stresstest proves this perfectly).

Yeah sure! The very first demo party I attended was Place To Be again in 1994. I had no drivers licence so my father offered to drive me (+900kms) to the place! I was thrilled, like a kid on Christmas morning, being amongst the last of the great French demosceners. Guys like Dune, Holocaust, Niko/OXG, EXA…

I spent three sleepless days running all round the hall room and then went to get some rest on the compo night… only to eventually wake up on the following morning! Yes, I had completely missed the compo! In the end, it was a mixture of joy and disappointment but undoubtedly a great memory :)

Again, I would choose 1994 because it was –in my humble opinion- a turning point in the Atari ST history : famous ST crews left for PC or even fewer for the Falcon, while I was only just starting my “scene” life. The ST demoscene died in 1994 and was reborn, even stronger, a few years later. The death of a generation and the birth of another one!


Are you STill doodling?

These days it’s a bit tricky to find time and motivation to work on things and I don’t even doodle that much on paper anymore. I have never been too fond of Art Studies so that I missed the basics... I went back to pixelling in 2013 but I haven’t really been too productive and the few things I did, well, I don’t think anyone will remember them? I don’t own an Atari ST anymore (gosh, it tore my guts out to give it away!) yet even though I’m using Peecee, it’s only to run Steem and CrackArt. The only way I know is : 16 colours, STf palette, nothing more, nothing less.


Will you remaster any artworks?

I have never really thought about reworking my Atari pics on the peecee. Firstly, because I like to paint on such limited retro hardware and within the STf limitations (I don't need STe palette). Secondly, because peecee is no fun to me, I don't ever want to mix Atari with peecee. Thirdly, I don't have the needed knowledge nor the will to do so. Basically, the answer is "no Steve" :-)


The future of the Atari ST?

I am no fortune teller but, over the last 3 decades, I have claimed the demoscene to be dead more than once! Obviously, we probably cannot expect fresh blood from the younger generation and we are all growing older and have busy lives. However, there is still room for newcomers and I hope that people find some motivation to do something over the years. Big Atari events, be it Sillyventure or STNICCC (2032?) or God knows what else are needed. We are quiet but we are still here and for a long time!

Last but not least you are invited to visit my blog: democyclopedia.wordpress.com or visit me on Twitter @stsurvivor. Thank you for this interview Steve and keep up to good work!


Here is a selection of images I've chosen from Sebastien's back catalogue. I personally feel his style is a constant throughout whilst always having that particular charm and flamboyant flare. The "lamer" image is a classic for us that spent hours reading scrollers back in the day, it makes me smile. However, the "Loudhead" image scares the c$!p outta me! The blooded "Cradle" picture, well, that's just wrong... I think it's impossible to pick out just one favourite but I think "STj" is pure genius. Click each of these incredible pictures and everything available via Demozoo.

Email ThisBlogThis!Share to TwitterShare to FacebookShare to Pinterest
Labels: Interviews