Once again, pesky aliens are giving us Earthlings lots of grief. We fought them off but they managed to pinch a time machine and are now using this to alter history and wreak havoc by taking crucial hostages from each period in an attempt to halt their influence. From the invention of the wheel in prehistoric times to England's King Arthur uniting Britain and where would any of us be today without Japan and their technical wizardry?

So it's our job to travel these various timezones to rescue everybody. Whilst there, we may as well kill each and every bad dude that gets in our way. Yup, it's time to save the day again so lets lock and load!! 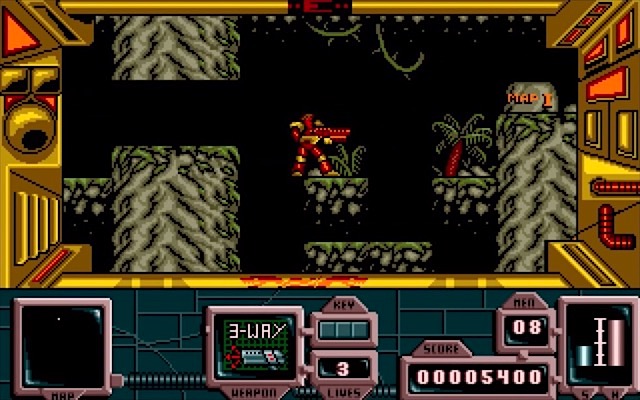 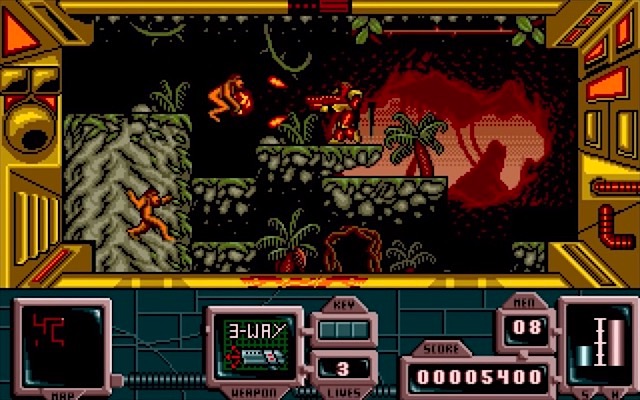 Pick-ups are pretty cool but something like the Map parts is essential for this huge platformer!!

Zone Warrior is a MASSIVE horizontally scrolling platformer which reminded me of Psygnosis' Baal in looks and with more than a hint of Turrican-style action. Each zone is a labyrinth of large rooms interconnected by a series of doorways and there is a total of five timezones which need to be saved from the dreaded aliens:

Travelling through most zones is a neat experience with constant action to keep your trigger finger happy. During this onslaught, look for hostages to free and a key for a final battle before you can progress to the next zone. Each of these periods has its own specific nasties to contend with and some cannot be killed so need to be avoided, like the Venus flytraps and sharp spikes. However, most have legs or teeth so have your trusty Turrican-inspired weapon at the ready. This is a rapid-firing gun which performs very well and can even be upgraded with a wider spread. Also, the spacebar is used to cycle through any extra weapons you may have picked up like bombs and mines.

The trouble with Zone Warrior is that it's too easy to lose your bearings. The levels are absolutely massive and wandering from room to room is quite overwhelming due to the lack of any distinctive visuals, so each location soon begins to look and feel the same. Thankfully, our little zone warrior can collect pieces of a map to help prevent him from getting lost but I personally thought this was poorly implemented and quite limiting, which is a shame. 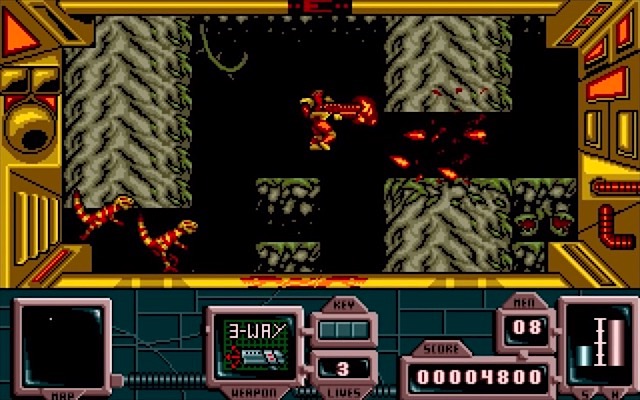 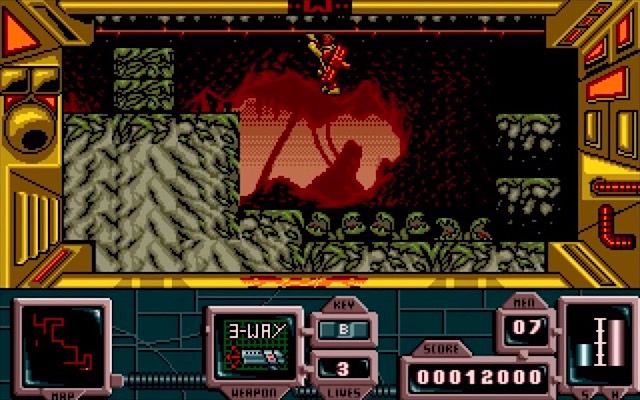 I really enjoyed the prehistoric levels with their cool dinos and neat methods used to avoid them!

The visuals aren't the best I've seen from my lovely Atari ST but the scrolling is good and responsive to our hero's movements which is essential to a running shoot 'em up. The backdrops are nice but could have made better use of the palette for things like destructible blocks. Most sprites are well-drawn and detailed, especially the stripy dinos from the Prehistoric Zone. Overall, the Medieval and Japanese zones look the best, I thought.

Audio is a blast with great sound effects used throughout. However, it's the music I really loved because everything is composed by Barry Leitch who created a wealth of fantastic chiptunes. Show-stompingly brilliant audio!! 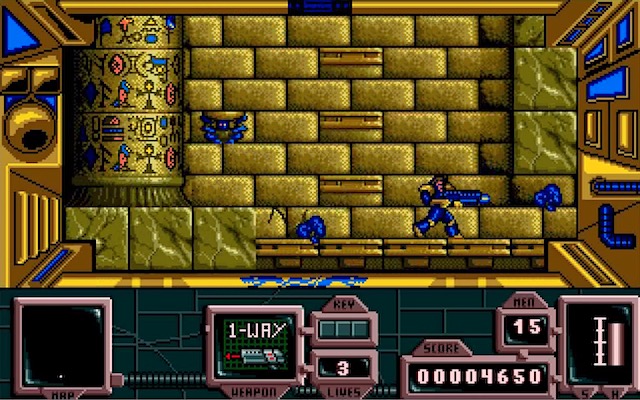 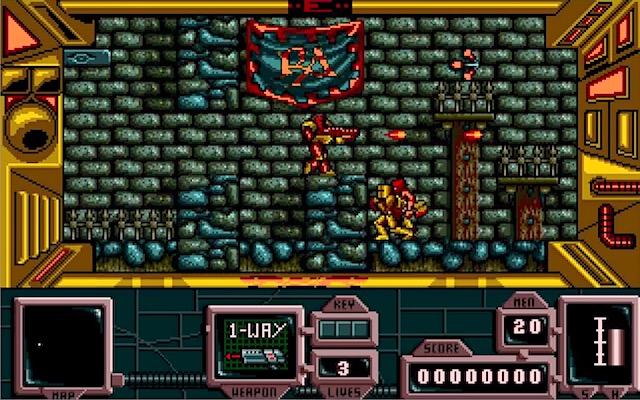 The graphics and music may change but the gameplay is pretty darn familiar for each level...

What a great action-platformer with interesting levels using mechanics that work well and spot-on responsive joystick controls. It's always fun killing monsters whilst avoid silly traps but I felt that the level where too samey and far too large. I lost my bearings, even with a map - so I'd have liked smaller levels using a more varied style of visuals.

Overall, I've enjoyed being a Zone Warrior a lot!! Well, even if it does whiff of cheap Turrican perfume!

Update: we now have a hard drive installable game thanks to Peter @8BitChip.
Stonish has the floppy disk download thanks to the Fuzion #80 disk :-)
Click the GEM green arrow below to hear my favourite tune from the game: