Kev's World was developed for FloppyShop by Ben Pritchard and is the prequel to The Curse Of Bolda. In this flick-screen platformer, we're off to explore many rooms grabbing stars and shooting monsters in order to rescue our beloved Katherine from the clutches of Bolda. Along the way are many pitfalls and even the odd puzzle to solve using keys and teleporters before eventually battling the deranged-looking Bolda in a rather crude end-of-level boss fight.

The joystick controls are perfect and I love how agile Kevin's movements are but keep this Krazy Kid busy otherwise hs soon moans that he's bored using a speech bubble. Also, this can be used to indicate when Kev's hurt or any items/power-ups he's collected. Floor panels are randomly placed and stepping on one will reward you with extra points or a smart bomb that kills everything on-screen. However, this is totally random so may instead cause a rockslide, alert the baddies to your location or reverse the controls. Are you ready to take a chance?

Bonuses are scattered throughout and offer a variety of cool features: QuintStar contains the value of five individual stars. Aurora Of Invincibility provides temporary invulnerability from everything but spikes. Hero Head ... well, don't get too excited because it's a 1UP!! Power Heart boosts Kevin's health. Sands Of Time adds to the ever-decreasing time limit. Oh, and Kevin's also partial to playing arcade games if you happen to find one...

What I love about Kev's World is its traditional oldskool gameplay which is just downright good fun. Joystick controls are superb and the addition of bonuses along with smart bombs and other surprises really makes this game stand out. Okay, it's a little sluggish and I'm sure the DMA lurking within the STe would have helped but overall, I have really enjoyed playing this two-level demo and it's definitely something I would have bought back in the mid-90s.

The two-level demo of Kev's World can be downloaded on either floppy or for your hard disk. 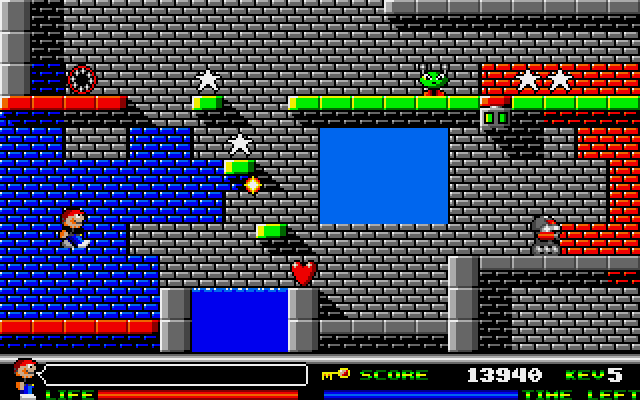 There are many different baddies but watch out for the little green alien thing - I hate those! 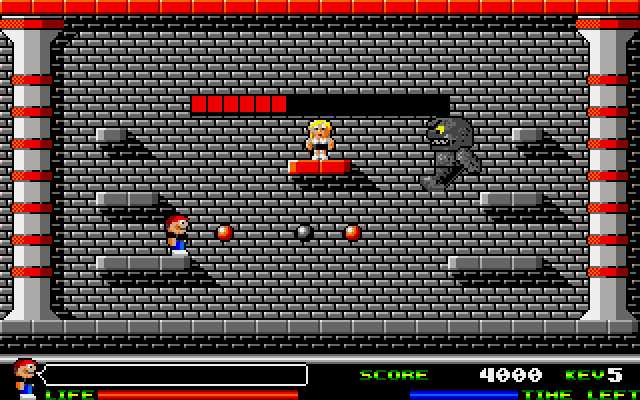 Shoot Bolda in the face to save your girlfriend... 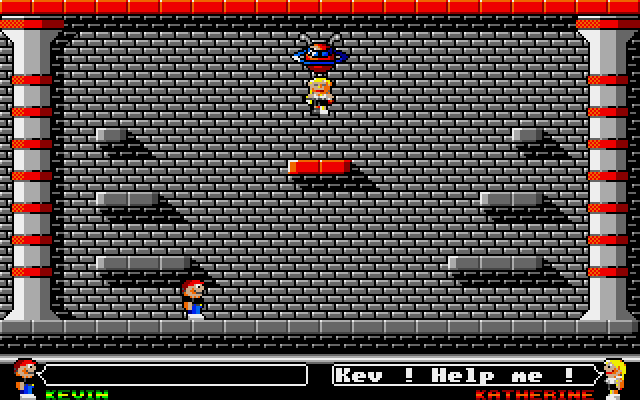 ...before she is (slowly) whisked off once again!! 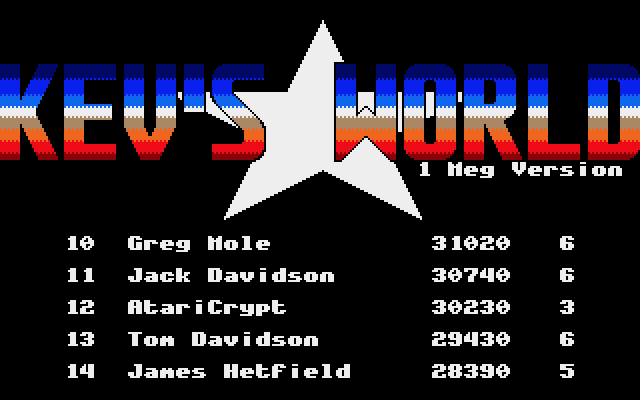 Completed!! I made the 12th place and even beat Metallica. Howzat!!

Email ThisBlogThis!Share to TwitterShare to FacebookShare to Pinterest
Labels: 1993, PD