When AtariCrypt was just a little baby I came upon a scrolling platformer called The Curse Of Bolda which is such a fun game and one I really enjoyed playing. However, I was new to Hatari and figured I was doing something wrong because it seemed pretty sluggish so I whacked it up to the dizzy heights of 16Mhz and everything was perfect.

Shortly afterwards, I heard from the developer who seemed chuffed that people were still playing his old games and (eventually) I got around to playing his other called Kev's World. This is a flick-screen platformer which I really enjoyed, probably because STOS coped better without scrolling the screen? Fun, with an oldskool charm.

Anyhow, I've since been talking to Ben who has found the original [registered] disks of The Curse Of Bolda which are now freely available from AtariMania. However, I couldn't leave it there... Yup, I had to ask a few questions for our interview section. My sincere gratitude to Ben for hunting down the disks and answering these questions... :-)

Well, first of all, my STory can't be told without that of my best mate Paul; he introduced me to the Atari ST and was my "sparring partner" in making games. We started out making text adventures at first - me on an Amstrad CPC at the time, and him using ST Basic - around 1988/89. Then he got his hands on the Shoot 'em up Construction Kit, which sold me on making the jump to the Atari. And then - just by sheer chance - I ended up getting the Discovery pack, through which we discovered STOS and start the voyage of discovery/development/geeky one-upmanship that ultimately led to Kev's World, the Curse of Bolda and indeed what I'm up to right now...


Which Atari ST were you using?

I started out with the 520STFM that came in the Discovery pack, then upgraded to the 1040STE Music Maker pack a couple of years later. I never had any hard drives or memory upgrades. Having attempted to solder adaptors into place, in a failed attempt to boost my 520 up to a 1meg, kind of put me off. And being in my teens, at the time, I didn't have the money for much else.


Tell us a little about your two games.

Both Kev's and Curse are very special to me - Curse because it was the first game I had actually released (despite it actually being the sequel to Kev's!), and because it had the 8-way scrolling and all the stuff I had originally wanted in Kev's but couldn't get working at the time. But I had a very special moment with Kev's - a few weeks after releasing it, I got a letter from a chap in Scotland (this is about 1995, before broadband and home internet/email became a thing) saying how much he enjoyed the game and asking for a hint on getting past the boss. That really struck a chord - someone was so into something I had made that they had taken the time to write to me and let me know... 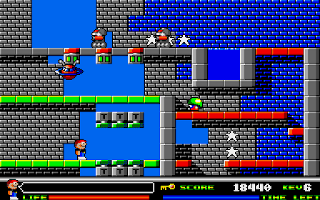 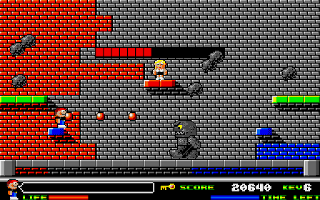 Although technically inferior, I personally thought Kev's World was a great platformer. So watch it, Bolda!


What's so special about Kevin?

Kev was kind of an evolving design... Originally he was a spaceman - believe it or not - for another game which I was working on called "Galanium". Then his space helmet was replaced by the face and red baseball cap for another game called "AstroKid" (again, abandoned). Finally, he got made over into the black t-shirt, blue jeans and big white trainers you see it in the games. As for the name - well, I was an unashamed metaller back in those days, and the trendy guys - who wore baseball caps and big white trainers were known as "Kev"s - so there it was: he was called Kev because he is a Kev!


Did either game live up to your expectations?

Both games blew me away - again, Curse by virtue of being first, and Kev's due to that letter I mentioned before. Plus the fact they made a few hundred quid between them - given that I had just started at university when I released Curse, extra cash was an amazing bonus. But the big thing was that both games got reviewed in both ST Format and Atari ST user - I never saw that one coming!

"Odyssey Island" was the working title of the third Kev game, and it was going to be bigger then Curse, with more complicated puzzle elements, impromptu boss battles, other characters to interact with, and a weapon system based on earth/air/fire/water elements, that also fed into the puzzle system. But by this time, it was 1995, and not only was I deep into my university course, but I had also been very ill, and everything seemed to be heading towards the PC and 3D, so it just stalled in the end. 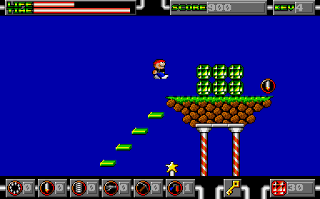 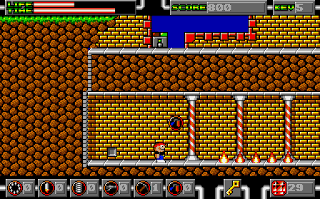 The Curse Of Bolda plays perfect using a 16Mhz computer to give STOS that extra grunt!

Because it came with the Discovery pack, and was better than SEUCK - or indeed anything Paul or I had used until then. Of course, we started using extensions - Curse owes its very existence to The Missing Link, and towards the end, we also learned how to use little assembly language snippets to improve performance, but STOS was the backbone of what we did.

Floppyshop and their "floppyware" scheme was a great experience - Steve (Delaney) was great to work with and full of enthusiasm, despite some teething issues with corrupted disks! He gave both games a great write-up in the catalogues - if memory serves, he said that Curse was "better than a lot of the £25 off-the-shelf titles" of the time! Looking back, licenceware worked well for both titles.


Why so little love for the Atari STe?

The STE version of Curse does actually use the DAC to play samples (hence why the STFM version is music only). As for the scrolling, we did not really understand enough about the guts of the STe to be able to do much (like I said, we were working largely in STOS and its extensions. Looking back, maybe we depended on that too heavily). Secondly, from what we could tell of the market by looking at other games being released, magazine coverage etc., it felt like the vast majority of ST owners had STFMs, so we coded to accommodate the widest possible player base. Heck, Kev's World was cut down for half-meg STs - although we did do a 1meg version with extra sound effects! 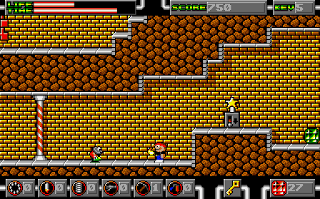 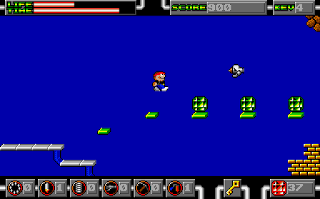 The Curse Of Bolda is cruel. Flipping one switch caused a fire and some platforms evaporate!


Would you consider upgrading either game with STe support?

I must admit - much to my shame - that since Odyssey Island stalled in '95, I haven't really thought about developing for the ST/STE. "Real life" got in the way too much - first university, then getting a job and a flat, and various other life events. In fact, I pretty much dropped out of game writing altogether from then right through to 2005 due to lack of time, money, hardware etc...


What are your favourite Atari ST games?

Back in the day, I was a huge platformer fan (as my own games may indicate!) - I loved Turrican 1 & 2, Rainbow Islands will always have a special place in my heart, titles like Ozone and Prehistorik that showed just what was possible with STOS... but my all-time number one has to be "The Killing Gameshow" by Psygnosis - now if ever there was a title that deserved an STE version it was that, for the music alone!


What are you and Ledasoft doing today?

These days, I am usually playing "being a Dad"! To be honest, I'm really not into playing games as I don't have the time to dedicate to the mainstream mega-titles, and the "indie" scene is just so full of shovelware it takes too long to even look for something to play! To be honest, these days I prefer to spend my time making games than playing them... which brings us neatly onto:

LedaSoft has undergone two major re-inventions since the ST days - the first was back in 2010 when we resurrected the "Leda" name as "Leda Entertainment" in an attempt to break into the mobile game market. We released about a dozen games over five or so years, but it really didn't work out.

More recently, we have changed direction again - this time we have kept the Leda Entertainment name, but changed what we are all about. Over our time in mobile, we met a lot of people trying to get into the games industry but always stuck behind the "lack of experience/no published titles" wall. So we changed direction - Leda is still firstly about us enjoying making games, but instead of hoping to make money, we have teamed up with a number of these talented artists and audio designers in the hope that the game we make and release together will help at least one of them on their way to their dream job!

The game we are working on is called "Bullion - The Curse of the Cutthroat Cattle" - it's a local multiplayer brawler based around a crew of pirate bulls. There are currently eight in the team, including Paul and myself, so Leda has grown a bit since the ST days! If you want to check out Bullion, go to www.bulliongame.com

So the plan for the future is to keep making games and, hopefully, help some people kick-start their career - ultimately to have fun! That said, I must admit that it's tempting to crack out the Atari STe once Bullion is done, just to see what I can still do - and I also have a half-finished PC remake of Curse somewhere I might finish up...

Email ThisBlogThis!Share to TwitterShare to FacebookShare to Pinterest
Labels: Interviews